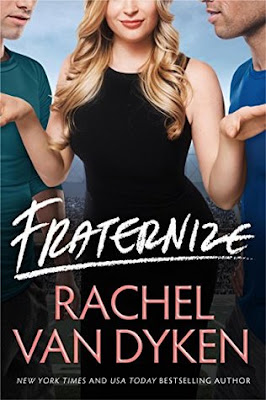 New York Times bestselling author Rachel Van Dyken kicks off a brand-new series in which romance is a game and love is a touchdown.

Emerson just made her dream come true as a professional cheerleader for her favorite pro football team. But even though the plus-size athlete is breaking down boundaries, she still has to contend with the massive rulebook. Carbs? Nope. Chocolate? Definitely not. Still, Emerson loves her curves, and she’ll rock the hell out of this job even if it kills her. Except for one mandate that is easier read than done…


No fraternizing with the players.


Problem one is Miller Quinton: Emerson’s first love, first sex, and the guy who still ignites her daydreams and R-rated fantasies. Thrown back together, Miller and Emerson feel the undeniable pull of passion again, even if the conflict that tore them apart seems insurmountable. Then there’s way-too-sexy Grant Sanchez. He has a serious reputation with the ladies, and when it comes to winning someone he wants, he doesn’t let anyone stand in his way.


Now Emerson is breaking every rule in the manual. But what she doesn’t know is that she’s part of a wicked little game—one that could steal both her dream and her heart.

Fraternize was a hilarious, charming, sexy, and fun contemporary romance. The author's writing felt so genuine and real that it was really easy for me to get sucked into the world she created. I genuinely laughed out loud numerous times and I swooned too many times to count while reading Fraternize. There were so many lovable and memorable characters in this book. I loved how the author created so many unique characters. There were side characters that were prominent throughout the entire story and they never felt like they were tossed to the side. One of my favorite things about all the characters was how hilarious they all were! Each character had their own unique humor, which really shined in this book. Going into this book, I knew there was going to be a love triangle. I was a little hesitant about the love triangle, however, the romance in this book surprised me. I don't want to spoil anything in regards to the romance, but I was EXTREMELY satisfied with out the romance ended up. I really wanted the romance to end up that way, so I was glad that is how the romance played out. My only issue with this romance was that I wish Emerson and one of the love interests would have had better communication. I felt like there was some unnecessary drama brought up due to Emerson and other characters lack of communication. That being said, I really enjoyed the romance as a whole throughout this story.This book had some really romantic moments that made me want to cry! The male character that Emerson ended up with was so swoon-worthy and he did so many sweet things!!! Also, THIS BOOK WAS SO STEAMY. HOLY COW!!!!! HAVE A TALL GLASS OF ICE WATER AROUND TO COOL YOU OFF!There were some elements of this book that felt a bit silly and too dramatic. I feel like some of those elements could have been toned down a tiny bit. One element of this book that I was not expecting was how emotional it got. There were some really hard topics that were addressed in this book, which made me tear up. I actually would have liked to see a little more development of that emotional storyline in the book, but I still enjoyed the amount of it that was presented in the book. Overall, this was a really fun and addictive book. I cannot wait to read the next book in this series!