My Kinda Song by Lacey Black

Today we have the release day blitz for My Kinda Song by Lacey Black! Check out the festivities and be sure to grab your copy today!

Abby Summer has been in love with one man most of her life, but he doesn’t know she exists. For years, Abby has watched him go home with woman after woman, not even noticing the one who stands loyally beside him. That’s why a dating site is the perfect solution to Abby’s problems: get over Levi and move on to someone else. She’s been by his side since they were kids, but Levi Morgan has suddenly started to see his friend in a whole new, beautiful light.

She’s everything he didn’t even realize he wanted or needed…until Abby signs up for a dating site. Now, Levi has competition in a way he’s never had before. What happens when the lines between friendship and lovers begins to blur? Will Abby and Levi be able to navigate a new kinda relationship? When lies are exposed, will it threaten everything they could be together?

*Though part of a series, this book can be read as a standalone. It is intended for those 18 and over due to graphic language, descriptive sex, and the world’s most inappropriate grandparents.*

Back on stage, Gage instantly starts heckling me about where I was with Crystal. I don’t bother telling him I wasn’t with her because he sure as shit won’t believe me. He’s one of those guys who latches onto something and won’t let go. Like a dog with a bone, he’ll keep needling me until I give him the juicy details. Only this time, there are no details to give, but that doesn’t matter. He’ll just accuse me of keeping my dirty little secrets to myself. We’ve been down this road before.
Grabbing my guitar, I give it a quick tune, making sure everything is just right. Dexter starts tapping out the beat on his drums, and Andy and I join in on guitar. Gage belts out the opening notes of “Ring of Fire” by Johnny Cash and the crowd goes nuts. It’s not the typical rock music we usually play, but when we find a good song that the fans love and we enjoy playing, then we go with it.
After another two songs, it’s time to slow it down. Gage heads off stage to take a quick break, and I step up to the mic. I usually sing backup, but for three songs during our show, I take the reins and sing lead vocals. This song is one of them. It’s my favorite song to sing because it’s Abby’s song.
Way back when we were in grade school, I caught her humming it as we walked home from school. She was going to help me work on our Constitution assignment at her place, which happened every week or so. That particular day, she was quiet, lost in thought, so I let her be. Suddenly, she started humming, and it didn’t take me long to catch on to the tune. She had the voice of an angel, I remember thinking, and wanted to beg her to sing something for me. I had already discovered my love for music, but knowing that Abby shared this passion with me was like kismet. When I asked her about it, she just shied away and hid behind her books. I went home and started working on that song on my guitar. It took a while, but eventually, I got it down, and have been playing it ever since.
I start strumming the opening notes of Jeff Healey’s “Angel Eyes.” Continuing to play the song I know by heart, I scan the crowd until I see her, standing in the back, a soft smile on her face as she sings along to the song. Everything and everyone around us just fades away. It’s as if we’re the only two people on the beach. The way she watches me kicks my heart into overdrive, because I know, when it comes to this song, she only has eyes for me. Not that I want her eyes on me or anything. I mean, we are just friends. But if it were something more than friendship, then I’d be the luckiest son of a bitch to have her there with me.
Closing my eyes, I sing the words I’ve known by heart for fifteen years to my best friend. I can picture her out there saying the exact same words at the exact same time. We’ve sung this song together for years. Not publicly, of course, because she’d rather strip naked and do the chicken dance in the rain in the middle of Main Street than to get on stage and sing. In the privacy of her apartment or mine, we’ve belted out the words on several occasions. Abby actually has a beautiful voice. She just refuses to let anyone but me hear it.
When I reach the end of the second verse, I open my eyes and scan the crowd. She’s still there, standing in the same spot, watching me and singing along. I give her a knowing grin as I finish off the song strong, singing it for her. For her because she loves it, not because it means anything more than that. She’s my friend, remember? We’ve covered this.
Why does it feel like I’m completely full of shit?

Lacey Black is a Midwestern girl with a passion for reading, writing, and shopping. She carries her e-reader with her everywhere she goes so she never misses an opportunity to read a few pages. Always looking for a happily ever after, Lacey is passionate about contemporary romance novels and enjoys it further when you mix in a little suspense. She resides in a small town in Illinois with her husband, two children, and a chocolate lab. Lacey loves watching NASCAR races, shooting guns, and should only consume one mixed drink because she’s a lightweight. Lacey’s debut novel, Trust Me, was released in August 2014 and has been an Amazon Bestseller twice for Free e-books, as well as #1 for Contemporary Romance. All of the Rivers Edge books have been bestsellers in the Romance and Contemporary Romance categories. 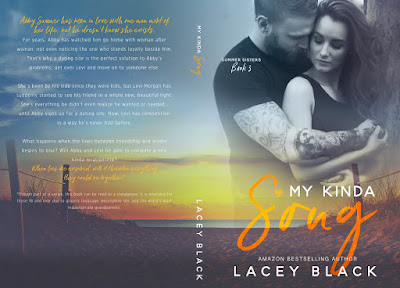