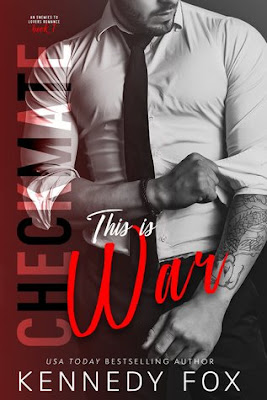 *An enemies to lovers romance*

Travis King is the worst kind of asshole.
He taunts me for being a good girl and mocks my high standards.
He’s cruel, crass, and has enough confidence to last two lifetimes.
And I hate him.


It wouldn’t matter so much if he were avoidable.

But considering he’s my older brother’s best friend and roommate, I see him more than I’d ever want to.

His sculpted abs and gorgeous eyes are a waste on such an egotistical man, which makes me hate him even more.

Even though I’ve had a crush on him since I was ten, the feelings weren’t mutual and he’s always made that very clear.

He’s always loved getting under my skin and one night against my better judgment, I let him in my bed.

I’ve succumbed to his manwhore ways, but that doesn’t change a thing.

Because the King is about to get played at his own game—and lose.

I started this series at the recommendation of a friend but little did I know I would be hooked instantly! I also didn't think that I would binge read every single book in the series, but I did, I totally did! I always love a good enemies to lovers story because I love all of the torment and angst that consumes the characters. So I was only too happy to have that angst come my way with Viola and Travis!

Viola and Travis are both completely misjudged by one another. Viola thinks Travis is the disgusting player who can't keep it in his pants, and he sort of is but he's also so much more than that! He's hard working, and thoughtful, and can be a real sweetheart when he cares for someone. Travis thinks Viola is a frigid book nerd, which she sort of is, at least the booknerd part. Yes she loves Harry Potter and studies her butt off, she also cares about those around her.

From the beginning it was torture because I wanted them together but I also wanted them at war because it was so fun to read! I loved seeing Travis breaking down Viola's walls that have been in place for so long. And those walls needed to come down because the chemistry between them is so real! I felt it down to my toes, guys! I can definitely say there were times when I wanted to scream at Viola and tell her to just listen, but I couldn't fault her because she's a fellow book nerd and I related to her so much.

Through all of the angst and arguments, this couple had me feeling all tingly inside too! The hate sex they had was...AWESOME! And the love sex they had...sublime. And lets just say the ending killed me, but luckily I had already purchased the second book and you should do the same, trust me.