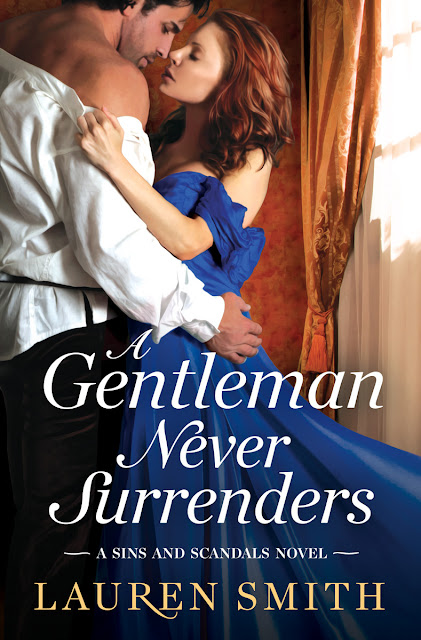 Love is worth a little scandal.

Owen Hadley needs a wife. Preferably a wealthy one. Alas, there aren't a great number of heiresses willing to marry a rogue of no particular fortune---luckily, if there is ever a gentleman capable of melting a lady's chilly heart, it's Owen.

Milly has had enough of the marriage mart. If matrimony means giving up her freedom for a foppish husband, then society can take their idea of marital bliss and toss it. But when the ton's most notorious rogue mistakenly makes his way into her bedchambers, Milly finds herself unexpectedly and unwillingly at the altar . . .

Yet the more time she spends with her new husband, the more Milly starts to wonder if the marriage she never wanted may be the best thing that's ever happened to her. Now it's up to Owen to convince Milly that what started as a mistake is anything but---and that every night with him will be more wonderfully scandalous than the last. 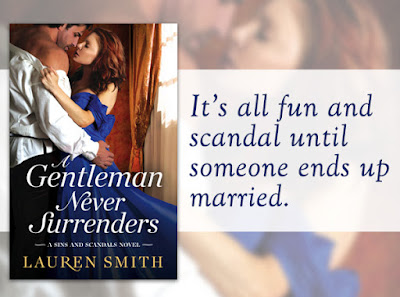 Milly climbed onto the bed and pulled the bedclothes up around her chest and sighed. The bed was so large, and rather lonely. Usually she didn’t let such a melancholy thought bother her, but tonight for some reason, it did. There was a dull ache in her chest and she rubbed the spot with her hand.

Somewhere tonight, Mr. Hadley was likely climbing into bed, dreaming of all the young ladies’ hearts he would steal and break. A treacherous little flutter in her chest made Milly wince. She ought not to think of Hadley, certainly not while she was in bed…yet thinking of him, as frustrating and maddeningly irritating as he was, flushed her with a welcome heat in the chilly room.

The oil lamp beside her bed was the only light left in the room and it burned steadily. Often she read late into the night and forgot to turn it off, but tonight she was too tired to read. She reached over and gently twisted the brass knob to kill the little flame. Darkness absorbed the dying light and Milly flipped onto her back. The cold of the sheets almost stung her bare toes and legs when her nightdress rode up to her knees. A cold bed, an empty bed. It shouldn’t have upset her, but after Mr. Hadley’s talk of heat and summer, she was off balance and bothered.

The mere thought of him and the way his eyes had darkened and seemed to shimmer with inner flames brought on another rush of warmth. His eyes, like honeyed fire, and his lips, the way he’d smiled sardonically, almost mockingly, in a way she rather liked, irritated her, yet fascinated her. There was no reason to like a man’s mouth or to imagine what it might be like to have that mouth pressed to hers in a kiss that caused the heat he was so fond of discussing. She knew his kiss would be hot, because when she thought of it, her body blossomed with a swelling of heat in her belly.

His mouth is wicked…sinful…and I hate that I wish to know how he tastes. It was a forbidden thought, but one she couldn’t deny. She rolled over onto her stomach, fluffed her pillow, and squeezed her eyes shut, attempting to will herself to sleep. It was going to be a long night.

LAUREN SMITH, winner of the 2014 Historical International Digital Award, attended Oklahoma State University, where she earned a B.A. in both history and political science. Drawn to paintings and museums, Lauren is obsessed with antiques and satisfies her fascination with history by writing and exploring exotic, ancient lands. She is currently an attorney in Tulsa, Oklahoma.

Enter to win 1 of 15 free ebook downloads of A Gentleman Never Surrenders!