Black Bird of the Gallows
by Meg Kassel 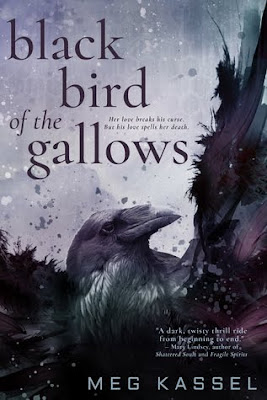 A simple but forgotten truth: Where harbingers of death appear, the morgues will soon be full.Angie Dovage can tell there’s more to Reece Fernandez than just the tall, brooding athlete who has her classmates swooning, but she can’t imagine his presence signals a tragedy that will devastate her small town. When something supernatural tries to attack her, Angie is thrown into a battle between good and evil she never saw coming. Right in the center of it is Reece—and he’s not human.What's more, she knows something most don't. That the secrets her town holds could kill them all. But that’s only half as dangerous as falling in love with a harbinger of death.

Black Bird of the Gallows was an interesting and creative YA fantasy novel. I really enjoyed the mythology and fantasy elements of this book. The author created an immersive and mesmerizing world that I got lost in. The world-building was executed very well, and I kept wanting to learn more and more about the world. I would have liked for the fantasy elements to have been presented a little earlier in the book to help pick up the pace, however, I still enjoyed the way the world was introduced. The beginning of this book felt cliche and predictable, but I still found myself wanting to know what was going to happen next. It was a slow beginning, but once the fantasy elements were introduced, the book got a lot more interesting. The book actually got quite creepy and mysterious, at times, which was something I was not expecting. I really enjoyed those elements, even though I was freaked out!The characters were all very likable. Angie, the main character, was a strong and independent girl. I liked that she didn't let her past define her and that she always stood up for herself. Reece, the main male character, was a swoony and mysterious guy. I was very intrigued by him, and just like Angie, I could tell there was more to his personality that he was trying to hide. The romance in this novel was predictable but it had so many sweet moments. I thought the author did a great job at creating some extremely swoon-worthy moments. I ended the book shipping Angie and Reece really hard and I was rooting for them to end up together!This book was an intriguing and dark novel. Black Bird of the Gallows was an emotional roller coaster, and I look forward to seeing what the author comes up with next!