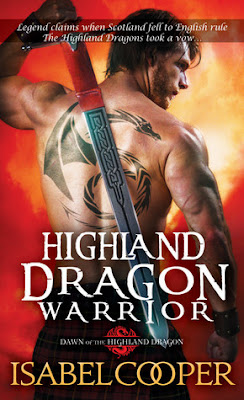 Legend claims
When Scotland fell to English rule
The Highland dragons took a vow:
Freedom at any price.The war may be over, but so long as English magic controls the Highlands, not even a dragon laird can keep his clan safe. What Cathal MacAlasdair needs is a warrior fierce enough to risk everything, yet gifted enough to outwit an enemy more monster than man.What he needs is Sophia.Alchemist Sophia Metzger traveled to Loch Arach in search of knowledge. She never dreamed she'd learn to do battle, ride through the stars on the back of a dragon, or catch the eye of a Highland laird. But as her quest turns to sizzling chemistry and inescapable danger, she'll soon discover the thrill of being caught in a dragon's claws.

Highland Dragon Warrior was a really interesting and unique paranormal romance. This book had dragons, magic, sorcerers, mystery, action, and romance! There was a lot of world building and I thought the author did a great job at creating this intriguing world. I also loved the Scotland setting. The author was so descriptive that I felt like I was there in Scotland with the characters!

Sophia was the main female character, and she was a strong and determined woman. Sophia was a smart woman and I loved how she stood up for what she believed in. She was ready to take down any evil that came her way, which was really inspiring. I really liked that her Jewish faith was brought up because it is nice to see other religions brought up in novels. Cathal, the main male character, was a powerful and fierce warrior. He was fiercely protective and fought for those he cared about. Sometimes his protectiveness was a little overbearing, but I know he was coming from a good place.

The paranormal elements of this book were intriguing. I loved that the author created such an immersive and unique world. I will say that the world-building sometimes took over the plot of the book, which led to the book feeling very slow at times. I also think there should have been more scenes with the dragon shifters and magic. However, when the action was introduced with the dragons, the story was addictive and hard to put down!

The romance in this book was steamy and full of sexy moments. I thought the author did a great job at creating a delicious and steamy romance. I actually would have liked to see more romantic moments between the two and for it to develop with a slower burn, but it was still a good romance.

Overall, this was an interesting start to a series! I am intrigued to see how it continues to develop!

Posted by MissDaemon at 1:07 PM