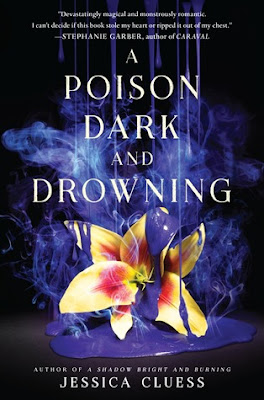 The magicians want her to lead.The sorcerers want her to lie.The demons want her blood.Henrietta wants to save the one she loves.But will his dark magic be her undoing?In this seductive and explosive second book in the Kingdom on Fire series, Jessica Cluess delivers her signature mix of magic, passion, and teen warriors fighting for survival. Hand to fans of Victoria Aveyard, Sarah J. Maas, and Kiersten White.Henrietta doesn't need a prophecy to know that she's in danger. She came to London to be named the chosen one, the first female sorcerer in centuries, the one who would defeat the Ancients. Instead, she discovered a city ruled by secrets. And the biggest secret of all: Henrietta is not the chosen one.Still, she must play the role in order to keep herself and Rook, her best friend and childhood love, safe. But can she truly save him? The poison in Rook's system is transforming him into something monstrous as he begins to master dark powers of his own. So when Henrietta finds a clue to the Ancients past that could turn the tide of the war, she persuades Blackwood, the mysterious Earl of Sorrow-Fell, to travel up the coast to seek out strange new weapons. And Magnus, the brave, reckless flirt who wants to win back her favor, is assigned to their mission. Together, they will face monsters, meet powerful new allies, and uncover the most devastating weapon of all: the truth.

Okay, I will admit that I was a little nervous to start this book. I was nervous because I had a lot of feelings from the last book, mainly regarding Blackwood, and I was not sure how it was going to play out in this book. However, as soon as I started this book, I knew this was going to be a good one. The author did a great job at keeping my attention throughout the entire book. I thought the plot was really addictive and interesting. I couldn't stop reading it! There were some predictable storylines, but I thought it was great overall. THIS WAS SUCH A PLEASANT SURPRISE FOR ME. I REALLY FREAKING ENJOYED THIS BOOK.
One thing I felt like I was missing from the first book was action and tons of magic. I felt like the first book focused a lot on practicing magic, which was really interesting, but I was dying for more. This book DELIVERED on that aspect. I loved how the magic element was still present and important, but there was more action to keep the book moving. The author really increased the stakes in this book and I felt a sense of dread for the characters. I WAS ALWAYS SO WORRIED ABOUT THEM. I FELT LIKE THEY COULD HAVE DIED AT ANY MOMENT AND I WAS NOT EMOTIONALLY PREPARED FOR THAT.

Henrietta was a badass in this book, which made my heart so happy. I was so proud of her whenever she used her powers and kicked the butts of the villains. I loved her curiosity and her desire to protect those around her. She has a huge heart and it really tugged at my heartstrings when she was worried about the people she cared about. I will say that I thought she made a few dumb decisions and was a little slow to catch onto some obvious things. Actually, a lot of the characters were kind of dumb in this book. I felt like some of the answers to the mysteries in this book were so obvious, and it pained me that the characters couldn't see the obvious answers. However, I still really love the characters. Especially my baby, Blackwood. BLACKWOOD IS LIKE MR. DARCY SO YOU CAN'T EXPECT ME NOT TO LOVE HIM. IT IS SERIOUSLY IMPOSSIBLE. I WILL MARRY BLACKWOOD ANYTIME, ANY DAY.

The romance in this book got me HEATED. There were multiple love interests in this book for Henrietta in this book, and I was not for two of them. I have had my ship since book one AND I AM GOING DOWN WITH THIS SHIP. Magnus was a funny and charming character, but I never felt the romantic connection between him and Henrietta. I was glad that Henrietta addressed their romance early in the book. The romance between Rook and Henrietta annoyed me. I am a huge supporter of friends to lovers tropes, but Rook just never pulled me in as a character. I just really don't want them together because I feel like they are better off as just friends. I guess that makes it obvious that I ship Henrietta and Blackwood, AND I DO NOT REGRET IT. THEY ARE MEANT TO BE TOGETHER. THE OTHER MEN NEED TO LEAVE THE PICTURE BECAUSE MY SHIP IS ENDGAME.
Overall, this was a really fun and mesmerizing book! I CANNOT wait to see what happens in book three. BRING IT ON!!!
4 / 5 Fangs
*This ebook was given to me in exchange for an honest review. *
Posted by MissDaemon at 8:30 AM