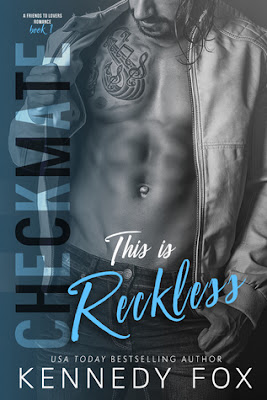 Drew Fisher is the type of guy every girl wants.


Noble police officer by day, charming prince by night.
He has no idea the effect he has on women, especially me—his little sister’s best friend.


I’m the blonde Southern belle who lives up to the cliché, except I have my own quirks. I’m smart as a whip, can change my own oil, and recite The Pledge of Allegiance backward, but he doesn’t see that girl.

It’d be easier to forget him if he wasn’t my roommate and if the first thing I saw in the morning wasn't his shirtless body covered in tattoos. I’ve crushed on him since the day we met, but he’s made it perfectly clear where we stand. Just friends.

I know I need to move on and accept that his feelings will never be mutual, but every day he smiles at me, I’m left dreaming of what if.

He has girl issues, and I’ve got a crush I can’t deny.
We’re friends, but I want more.


One drunken hookup leaves us with much more than a platonic friendship. Pretending it never happened proves to be more difficult than anticipated.

A crazy ex-girlfriend, a dangerous war of stolen glances, and passionate kisses leads to the most reckless battle yet. I won’t be a pawn in his game, but I’ll play by his rules if it will show him I’m the one worth breaking them for.

So here we are, book three of the Checkmate Series and the first book in the story of Drew and Courtney. Drew captured my special attention in the first two books of this series and I was practically salivating for his story!

Drew is sexy as sin and it doesn't hurt that he's a police officer either. Courtney is Viola's best friend and completely head over heels for Drew, too bad he's doesn't feel the same way. After Travis and Viola go off to live their perfect life Drew and Courtney end up becoming roommates (yay!). They've become so close but it's perfectly platonic, at least on Drew's end but I knew he couldn't resist her for long.  Courtney is such a lovable character. She has no filter, is super sweet, and loves sweets. I was doing a little dance when Drew finally decided he wanted to pursue things with Court and was ready for lots and lots of sexy time. Well...they certainly delivered! This book is CALIENTE! Dios mio, Drew and Court have a connection that can't be denied. I loved the twists and turns, even all the drama with that evil witch Mia because it added a certain thrill to it all.

Kennedy Fox have stolen my heart with these characters. Even though they irritate me at times because I want them to do something and they just won't listen to me, I still love them! I mean what do I expect to happen when I'm talking to my iPad screen. The Checkmate Series is a must read for anyone who loves stories filled with angst, love, and straight up passion!