Some Kind of Hero (Troubleshooters #17)
by Suzanne Brockmann 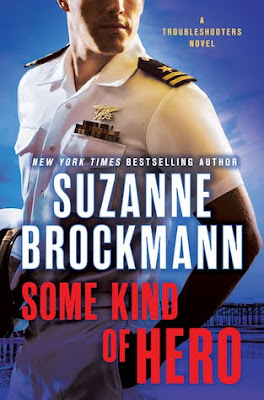 Navy men don’t come tougher than Lieutenant Peter Greene. Every day he whips hotshot SEAL wannabes into elite fighters. So why can’t he handle one fifteen-year-old girl? His ex’s death left him a single dad overnight, and very unprepared. Though he can’t relate to an angsty teen, he can at least keep Maddie safe—until the day she disappears. Though Pete’s lacking in fatherly intuition, his instinct for detecting danger is razor sharp. Maddie’s in trouble. Now he needs the Troubleshooters team at his back, along with an unconventional ally.Romance writer Shayla Whitman never expected to be drawn into a real-world thriller—or to meet a hero who makes her pulse pound. Action on the page is one thing. Actually living it is another story. Shay’s not as bold as her heroines, but she’s a mother. She sees the panic in her new neighbor’s usually fearless blue eyes—and knows there’s no greater terror for a parent than having a child at risk. It’s an ordeal Shay won’t let Pete face alone. She’s no highly trained operative, but she’s smart, resourceful, and knows what makes teenagers tick.Still, working alongside Pete has its own perils—like letting the heat between them rise out of control. Intimate emotions could mean dangerous, even deadly, consequences for their mission. No matter what, they must be on top of their game, and playing for keeps . . . or else Pete’s daughter may be gone for good.

I went into this book with no knowledge of the previous books, so I was a little worried that there would be things I wouldn't understand in this book. However, I was glad that this book truly could be read as a standalone OR a continuation of the series. I do think that I would have enjoyed this book a little more if I had read the previous books, but it was still enjoyable nonetheless. I will admit that Some Kind of Hero started off a bit rocky for me. It was hard to wrap my mind around what was happening. The beginning felt a bit abrupt and unbelievable, which made it a little difficult for me to really get into the book. However, around halfway through the book, things really started to kick off. The action and romance both started to come to a head and become explosive. I thought the suspense the author weaved into the later portion of the book was extremely exciting and addictive. The main female character, Shayla, was a fun character to read about. She was funny, dedicated, kind, thoughtful, and fiercely loyal. I really admired how great of a mom she was. She truly wanted her children to be happy and she always tried to go out of her way to make the best lives for her kids. I also loved that she was an author because as a book fanatic, I thought it was wonderful that I could relate to her love of books. I thought she was a strong and wonderful main character. My only issue with Shayla was the fact that she talked to her fictional characters in her head. It got very annoying and even confusing when she would talk to her characters in her head. Personally, it took me out of the story and I wish it wouldn't have been as prevalent. Peter the main male character, was a hot and charismatic alpha male. It was very attractive to see how much he cared about his daughter, even though he wasn't that close to her. I thought at times he was a little overbearing, but he was very swoon-worthy overall. His romance with Shayla was full of sexy moments that made me want to fan myself off. I thought they made a very dynamic duo and I liked how well their personalities complimented each other. Maddie was Peter's daughter and I was surprised how much time we got to spend with her in the book. There were times when she came off as bit bratty and immature, but I could see how smart she was and that she would grow into a smart and dynamic woman. Her relationship with Dingo warmed my heart. Dingo wasn't necessarily a great guy, but he had a kind heart. I really enjoyed watching their friendship blossom. Since there was an age gap with Maddie being so young (Maddie was only 15), I had a hard time shipping them romantically. However, I would love to see them in a book in the future once they have aged a bit. I definitely think they could have a romance that would steal my heart. The chase for Peter's daughter created an exciting and nail-biting plot for this book. I think fans of this series and fans of suspenseful romances will really enjoy this book!