CATCHING THE COWGIRL by Jennie Marts

More importantly, he needs to find a way to keep her. 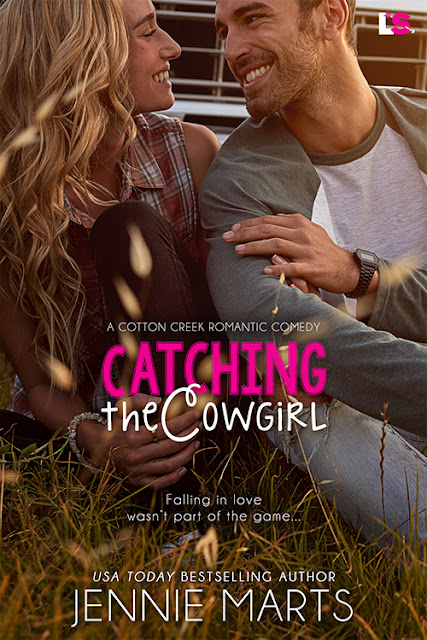 California video game designer Adam Clark knows that, in his business, authenticity is the key. So, for their newest Western adventure game, he and his partners decide to try out Cowboy Camp. Only Adam’s friends never arrive, leaving him a bit—okay, a lot—preoccupied, trying to resist the gorgeous cowgirl who owns the ranch.

Single mom Skye Hawkins is too busy trying to keep her family’s dude ranch out of the red to even think about romance. But she’s having trouble avoiding Adam. He’s smart, he’s sweet, he’s funny…and he’s hot! Maybe it’s the mountain air, but she finds herself letting down her guard. And the fireworks are definitely worth it.

The only problem—they live in totally different worlds. Still, Adam is nothing if not resourceful. Sure, he wants to catch the cowgirl. But more importantly, he needs to find a way to keep her.

“This ledge is crazy. I’ve died ten times trying to make this jump. I can’t make it across the river,” she said, passing him her controller. “Can you just get me past this part so I can move on?”

Normally he wouldn’t even consider it. It would take away from the game play and the integrity of the puzzle. But nothing about this was normal. And he was quickly realizing that he would do just about anything for Skye Hawkins—wear cowboy boots, muck out disgusting horse stalls, even attempt to country dance. Whatever she wanted.

He took the controller and easily maneuvered her character over the ledge and into the river.

“Oh no, be careful.” She tapped his leg anxiously. “This is the part where my character usually drowns.”

“I got this,” he assured her with a laugh. But her enthusiasm was so contagious, he played up the drama for her benefit. “I don’t remember this being so tough, though. I might not make it after all.”

But he knew he would. He’d designed this part and replayed every feature of it a hundred times. But he couldn’t resist the way she clutched his arm and hopped up and down in her seat with anxiousness.

“Watch out for the crocodile,” she shouted, pointing at the screen. “You’re almost there.”

He worked to manipulate the character so it swam past the crocodile and crawled out on the other bank, almost losing his concentration when she buried her head against his shoulder, laughing as she claimed she couldn’t watch.

When she saw that he’d made it across the river to the other side, she let out a sigh of relief.

“You did it.” She gave him a hug. “Thank you for sharing this with me.”

Adam caught his breath as her cheek pressed to his.

As if it had a mind of its own, his hand slid around her waist, pulling her to him as he hugged her back.

She drew back, but just slightly—just enough for him to see her face and take in her wide-eyed look of surprise.

His gaze dipped to her mouth—to her slightly parted rose-colored lips—and she inhaled a quick sharp pull of breath.

Not him. He couldn’t breathe at all, couldn’t move.

He was frozen in place, even though every synapse in his body was firing on all cylinders sending sparks of heat surging through his veins.

He looked back up, into her eyes, searching for a sign, anything that would tell him she was feeling the same thing, the same swirling sense of dizziness that had his own stomach in knots and his mouth going dry. Anything that would give him a glimpse of permission.


But she seemed to be frozen as well, suspended in the moment, as if she were waiting, afraid to move.

He leaned in—just a fraction of an inch—but close enough that his mouth was a whisper away from hers. She didn’t pull back, and he moved the smallest bit closer and brushed her lips softly with his.

She sucked in a soft gasp, the tiniest sound but full of gigantic meaning. A sound that was a cross between pleasure and pain. It pierced his heart.

He stopped, not pressing, but not pulling away, as he felt the slight tremble of her lips against his. He waited, his heart pounding hard against his chest, somehow knowing that this moment could change everything. 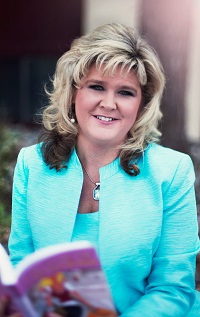 Jennie Marts is the USA Today  Best-selling author of award-winning books filled with love, laughter, and always a happily ever after. Readers call her books “laugh out loud” funny and the “perfect mix of romance, humor, and steam.” Fic Central claimed one of her books was “the most fun I’ve had reading in years.”

She is living her own happily ever after in the mountains of Colorado with her husband, two dogs, and a parakeet that loves to tweet to the oldies. She’s addicted to Diet Coke, adores Cheetos, and believes you can’t have too many books, shoes, or friends.