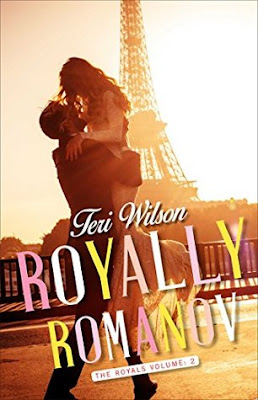 In this charming modern day retelling of the 1956 classic Anastasia, a museum curator falls for a mysterious man who may or may not be a long lost heir to Russia’s imperial Romanov dynasty.

Finley Abbot is organizing the most prestigious art exhibit of her career at the Louvre museum—a retrospective of art from the House of Romanov. But the sudden appearance of Maxim Romanov threatens to turn her into the biggest laughingstock of the art world. When she finds herself falling in love, she realizes there’s even more at stake than her career. How can she trust a man with her whole world when he can’t remember a thing about his past?

After suffering a violent blow to the head, Maxim’s only clue to his identity is a notebook containing carefully researched documentation in his own handwriting indicating that he is the sole surviving descendant of the Grand Duchess Anastasia, previously thought dead in the murder of her family during Russia’s Bolshevik revolution. His struggle to put the mysterious pieces of his past back together leads him to Finley. At first, she’s convinced Maxim is nothing but a con artist. But there’s something undeniably captivating about the beautiful, brooding man who claims to be searching for his identity—something Finley can’t quite bring herself to resist. When he reveals a secret about one of the imperial Fabergé eggs in the collection, she accepts he may actually be telling the truth. But as soon as Finley and Maxim act on their feelings for one another, Maxim is confronted with evidence that calls into question everything he’s begun to believe about himself.

Royally Romanov was a charming and romantic book! I fell in love with the setting and plot of this story, and it was like nothing I have read before! The nods to Anastasia throughout this book warmed my fangirl heart! Also, the history of the Romanov family was extremely interesting to read about, because I really didn't know much about them besides what I know from the animated Anastasia movie. I thought this was a fast and fun read!Having this book take place in Paris was such a delightful treat. The author did such a wonderful job at describing the city so well that I felt like I was actually there! I was entranced by the city and everything it had to offer. The main female character, Finely, was great! I thought she was a smart, dedicated, resourceful, and kind woman. Her fascination with art and the Romanov family were such unique and interesting characteristics of her personality that I loved reading about. Another thing I liked about her was that she was wary of trusting strangers, even hot ones! That felt extremely realistic, and I was grateful for it. I really connected with her character and I enjoyed learning more about her as the book progressed. The romance in this book was fun and full of steam! I really liked Maxim and Finely as a couple. I liked the tug and pull of their relationship and the mystery behind it. The connection they had was intense, and I could feel the sexual chemistry coming off the pages of the book! The steamy moments were also balanced with some sweet and romantic moments, which was wonderful! I will say that I felt like their feelings became too intense too quickly near the end of the book, but I still enjoyed their relationship overall. The mystery surrounding Maxim was addictive and intriguing. I loved not knowing what happened to Maxim and not knowing who he was. I was able to predict a lot about Maxim, but I still liked watching the characters piece together the clues and solve the mystery. Some of the reveals felt a bit too rushed, but I still thought the mystery was intriguing as a whole. Overall, this was an enjoyable and romantic read. If you are looking for a quick book with romance, history, and mystery, then this is the book for you!