Eyes On You by Laura Kaye

From New York Times Bestselling author Laura Kaye, comes EYES ON YOU, a new novella in her Blasphemy Series, brought to you by 1,001 Dark Nights! Be sure to grab your copy today! 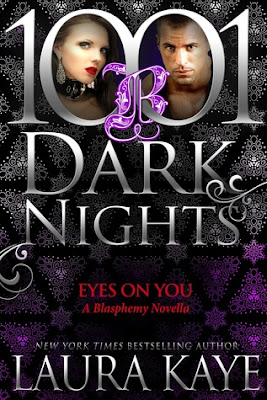 When a sexy stranger asks Wolf Henrikson to rescue her from a bad date, he never expected to want the woman for himself. But their playful conversation turns into a scorching one-night stand that reveals the shy beauty gets off on the idea of being seen, even if she’s a little scared of it, too. And Wolf loves to watch.

In the wake of discovering her fiancé’s infidelity, florist Olivia Foster never expected to find someone who not only understood her wildest, darkest fantasies, but would bring them to life. As Wolf introduces her to his world at the play club, Blasphemy, Liv finds herself tempted to explore submission and exhibitionism with the hard-bodied Dom even as she’s scared to trust again.

The silence that followed was thick with tension, and Liv almost couldn’t decide if she’d hallucinated what’d happened or if this first date was truly just that bad. Jerry wouldn’t make eye contact and, instead, peered down at his cell phone beneath the table. So she took the opportunity to survey the diners sitting at the horseshoe-shaped bar near them in the hopes she’d see someone, anyone, she knew. God, please give me a way to escape Mr. I Don’t Use Menus. But God had clearly forsaken her, because the party of three women having a girls’ night out were strangers. As were the various groupings of men, some of whom wore Orioles gear and watched the pre-game commentary on the captioned television screens above the bar. An elderly man she didn’t know sat alone nearest to their high-boy table nursing a glass of bourbon, and two seats down from him…sat the hottest man Liv had ever seen.
And that was her impression just from seeing him in profile.
He had dark blond hair and a chiseled jaw, and even sitting, it was clear that he was tall.
Seriously broad shoulders filled out a dark green button-down shirt, and big hands gripped a glass of water. Now God was just being mean. Because someone was going to get to be with that man tonight while she was stuck here with Jerry of the I Don’t Use Menus clan. As she watched, not-Jerry pressed his cell phone to his ear and began talking in tones too low for her to hear.
On a sigh, Liv returned her attention to Jerry. Not that it mattered, because his gaze remained fixed on his phone. She drained the rest of her Prosecco and wished someone would bring her the bottle. That wouldn’t be too awkward for a first date, right? Right?

New York Times and USA Today bestseller Laura Kaye is the author of over twenty books in contemporary and paranormal romance and romantic suspense. Laura grew up amid family lore involving angels, ghosts, and evil-eye curses, cementing her life-long fascination with storytelling and the supernatural. Laura lives in Maryland with her husband, two daughters, and cute-but-bad dog, and appreciates her view of the Chesapeake Bay every day.
Laura is a member of the Romance Writers of America, the Maryland Romance Writers, and she is past president of the RWA-Contemporary Romance Writers.