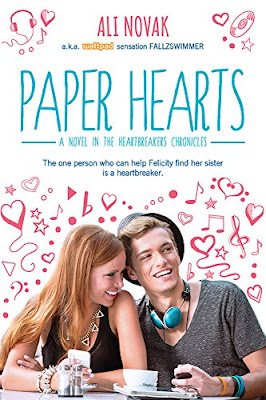 “When I met Alec Williams, I nearly fainted. Totally embarrassing, but how often does a regular girl get to meet a famous heartthrob?”Felicity has been living in the shadow of her best friend Lucy since they were kids. But things change when she is introduced to a quiet guy named Alec. At first Felicity is intimidated by his fame, but as the two grow closer she starts to realize that Alec just might be the guy of her dreams. No other guy has ever made her feel so alive. The only problem? Lucy has different plans for Alec—plans that start with prom. Felicity quickly realizes that she will have to make a decision. Will she choose her best friend who has always been there for her, or the mysterious boy that she can't stop thinking about? Whatever her choice, someone is going to be left broken hearted.Meet... The Queen of Hearts.

Paper Hearts was a quick and entertaining book! The characters were all charming and fun to read about. Some of the antics and drama in this book were a bit silly and hard to believe. I felt like a lot of the things that happened in this book would never actually happen. However, it was still fun to read it about when I wasn't thinking too hard about how crazy some of the things seemed. It was a fun escape for a fangirl like myself. This book really focused on Felicity, the main character, and her crazy dramatic/soap opera life. Her life was a bit ridiculous at times, but it added some drama to the story. Felicity was a funny and quirky character. I liked how down to earth and determined she was, even when things were going a bit insane. I liked the coming of age journey she went on and admired her growth throughout the story. There were times I wanted to scream at her, but I did really like her as a whole. Alec was a shy and adorable character. His quietness was extremely endearing and precious. He made me SWOOOOOON. I JUST WANT TO HUG HIM. HE IS SO STINKING CUTE! Alec was a bit of a mystery, which was very alluring, but I still would have liked to get to know a little more about him. There was a lot of miscommunication in this book. Characters made assumptions and didn't talk things out. A lot of the drama could have been solved quickly if the characters would have communicated!!!
The fangirl side of me LOVED the aspect of a boy band. I am forever a boy band lover, so I was basically dying at imagining dating a boy in a band. I would have liked to see even more of the band in this book, but I still loved the boy band moments that we did have. THE BOYS ARE ALL BESTIES AND IT WARMS MY HEART. THEIR SCENES WERE GREAT. I love all the boys, and I want to marry each one of them.

The romance in this book was super cute! I thought Alec and Felicity made a really sweet pair. Overall, this was a fun and quick read. I would recommend this to people who are looking for a fun escape.