Exploited by A. Meredith Walters 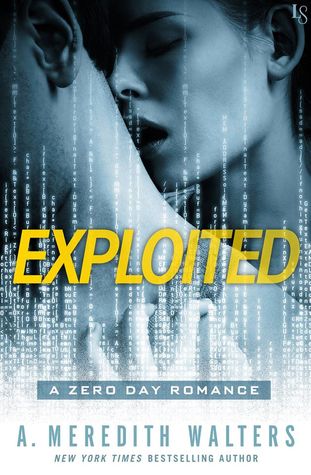 In this pulse-pounding novel from the bestselling author of Butterfly Dreams, a vigilante hacker plays a seductive game with the agent who’s chasing her online—and sharing her bed in real life.

At first glance, I’m nothing out of the ordinary. I am a daughter. A sister. A friend. When you look at me you won’t see anything that warrants suspicion. I don’t look like a criminal.

My name is Hannah Whalen, but most people know me as freed0mov3rdr1v3, or “Freedom Overdrive”—one of the world’s most prolific and notorious hacktivists. My goal—my purpose—is to shed light on the evil that lurks behind the corporate and government lies we have been force-fed for too long.

My story begins with the best possible intention. Devoting my life to exposing the corrupt. The dishonest. The unethical. For that, they label me a cyber-terrorist. Wanted by the FBI, I’ve always been one step ahead.

Until I fell in love.

Because I’m sleeping with the man who’s hunting me. And he has no idea that I am his prey. Now I have to decide what’s more important: my freedom or my heart.

"Those closest to us are the biggest deceivers."

It pains me to say I didn't love it. I have read other books by A. Meredith Walters and I have enjoyed them far more.

Why didn't I love it?

Mainly because I didn't like the portrayal of Mason Kohler, the male love interest.

What I did like was the idea of the plot.

Hannah Whalen is a young woman seeking revenge on the people who hurt her family. She was in college when tragedy strikes. During those dark times, she was angry and lost until her roommate gave her another choice, to get even with those who were involved in causing her pain. This is how Hannah begins her hacking life. Years later, she is a well-known hacker who goes by the name of Freedom Overdrive. She uses her hacking skills to destroyed corporations who are dishonest or do illegal things. She's considered a cyber-terrorist and is wanted by the FBI.

Mason Kohler is an FBI agent. He recently relocated to the city but things at work are not great for him. He made the mistake of sleeping with another agent who now is furious with him and his boss seems to hate his guts. He's also assigned a partner that is not very smart. Since his boss hates him, his new assignment is a lost cause. He's to uncover the identity of Freedom Overload and bring him to justice. No one has been able to track him down. Mason believes this could make his career as an FBI agent - very short.

Mason and Hannah meet. Hannah with the purpose of infiltrating Mason's work and protecting herself. Mason because he feels a pull towards her. She's different and interesting.

"I was making out with the man who hunted me."

So you see, a great plot but this is where my problems begin. Mason didn't feel like an alpha to me. He blushes, he permits his family to abuse him, he's not smart enough to piece everything together despite his instincts screaming he CAN'T trust her. He has no sense of protecting his work at home. Really! An FBI agent should know better.

"Don't trust the person who has broken faith once."

Hannah, on the other hand, was smart, sassy and crafty. She was able to manipulate Mason over and over. I felt bad for her. She thought she was doing it all for her family and to help people who were taken advantage of by companies or the government. She was a crusader in her own mind. She was still in a lot of pain and she really didn't have any friends that could help her see how much trouble this could bring her.

Overall, Exploited does have a good suspense in the way that we don't know who's trying to hurt Hannah. Does she have a stalker? Who hates her and why? I thought I knew the answer to my questions but sadly this book ends in a cliffhanger.


A complimentary copy was provided by Loveswept via Netgalley in exchange for an honest review.
Posted by MrsLeif at 8:30 AM