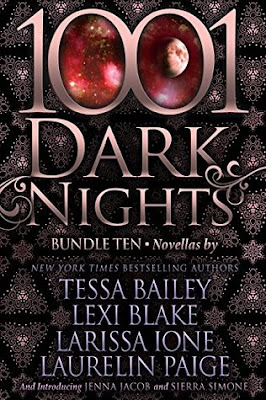 ROUGH RHYTHM: A Made In Jersey Novella by Tessa Bailey Band manager James Brandon never expected to find the satisfaction he’d been chasing, let alone stumble upon it in some sleezy Hollywood meat market. Yet the girl’s quiet pride spoke to him from across the bar. But after losing the grip on his dark desires that one fateful night, James has spent the last four years atoning for letting her down. Rock band drummer Lita Regina has had enough of James’s guilt. She wants the explosive man she met that night in Hollywood. And she’ll stop at nothing to revive him.

DEVOTED: A Masters and Mercenaries Novella by Lexi Blake Amy Slaten has devoted her life to Slaten Industries. After ousting her corrupt father and taking over the CEO role, she thought she could relax and enjoy taking her company to the next level. But an old business rivalry rears its ugly head. When Flynn Adler realizes the woman he’s falling for is none other than the CEO of the firm he needs to take down, he has to make a choice. Does he take care of the woman he’s falling in love with or the business he’s worked a lifetime to build?

Z: A Demonica Novella by Larissa Ione Zhubaal has spent decades searching for the angel he loved and lost nearly a century ago. Not even her death can keep him from trying to find her. But as time passes, he’s losing hope… As an emim, Vex has always felt like a second-class citizen. But if she manages to secure a deal with the Grim Reaper she will have earned her place in the world. The only obstacle in the way of her plan is a sexy hardass called Z. Soon it becomes clear that they have a powerful connection rooted in the past…

FALLING UNDER YOU: A Fixed Trilogy Novella by Laurelin Paige Norma Anders has always prided herself on her intelligence and determination. She climbed out of poverty, put herself through school and is now a chief financial advisor at Pierce Industries. She’s certainly a woman who won’t be topped. Not in business anyway. But she’s pretty sure she’d like to be topped in the bedroom. Unfortunately most men see independence and ambition in a woman and they run. Then the most unlikely candidate steps up. Boyd, her much-too-young and oh-so-hot assistant surprises her one night with bold suggestions and an authoritative demeanor he’s never shown her in the office.

CRAVING HIS COMMAND: A Doms of Genesis Novella by Jenna Jacob Mercy O’Connor—known as Symoné at Club Genesis—craves the chance to experience true surrender. The only problem is, she’s set her sights on sexy, commanding Sir Justice, who studies her with his dissecting, arousing stare…but never offers to show her his ropes. If Kellan Graham let himself believe in love at first sight, Symoné would own his heart. After having his life ripped apart, he’s spent years inventing ways to resist simple lust, but each time this beautiful submissive turns her pleading eyes to him, she ignites a complicated conflagration of desire Kellan can’t fight.

Every Dark Nights tale is breathtakingly sexy and magically romantic.


Tessa Bailey is originally from Carlsbad, California. The day after high school graduation, she packed her yearbook, ripped jeans and laptop, driving cross-country to New York City in under four days. Her most valuable life experiences were learned thereafter while waitressing at K-Dees, a Manhattan pub owned by her uncle. Inside those four walls, she met her husband, best friend and discovered the magic of classic rock, managing to put herself through Kingsborough Community College and the English program at Pace University at the same time. Several stunted attempts to enter the work force as a journalist followed, but romance writing continued to demand her attention. She now lives in Long Island, New York with her husband of eight years and four-year-old daughter. Although she is severely sleep-deprived, she is incredibly happy to be living her dream of writing about people falling in love.


Larissa Ione – Larissa Ione is a New York Times and USA Today bestselling author. An Air Force veteran, she traded in a career as a meteorologist to pursue her passion of writing. She now spends her days in pajamas with her computer, strong coffee, and supernatural worlds. She believes in celebrating everything, and would never be caught without a bottle of Champagne chilling in the fridge…just in case. She currently lives in Wisconsin with her U.S. Coast Guard husband, her teenage son, a rescue cat named Vegas, and her very own hellhound, a King Shepherd named Hexe.

Laurelin Paige –Laurelin Paige is the New York Times, Wall Street Journal, and USA Today Bestselling Author of the Fixed Trilogy. She’s a sucker for a good romance and gets giddy anytime there’s kissing, much to the embarrassment of her three daughters. Her husband doesn’t seem to complain, however. When she isn’t reading or writing sexy stories, she’s probably singing, watching Game of Thrones and the Walking Dead, or dreaming of Michael Fassbender. She’s also a proud member of Mensa International though she doesn’t do anything with the organization except use it as material for her bio.

With experience and knowledge she delves deep into the emotional psyche of strong Dominants and sassy submissives with her Doms of Genesis series and The Doms of Her Life series (co-authored with Shayla Black and Isabella LaPearl). Her works have been called: savagely beautiful, captivating, and emotionally riveting. A hopeless romantic, Jenna paints a softer picture with her contemporary romance: Sky Of Dreams. A lover of life and laughter, she sets her zany sense of humor free in the romantic comedies: Sin On A Stick and Wet Dream. No matter the genre, you’ll want a box of tissues handy, Jenna tugs hard on the heartstrings.


Sierra Simone – Sierra Simone is the USA Today bestselling author of American Queen and Priest. She's a former librarian who spent too much time reading romance novels at the information desk. She's also a 4th degree black belt in kenpo karate, a narcoleptic, a former living history interpreter and is licensed to perform marriages in exchange for beer. She lives with her husband, two kids and a big, brown dog in Kansas City. You can also email her at thesierrasimone@gmail.com.