Fates and Furies by Raye Wagner 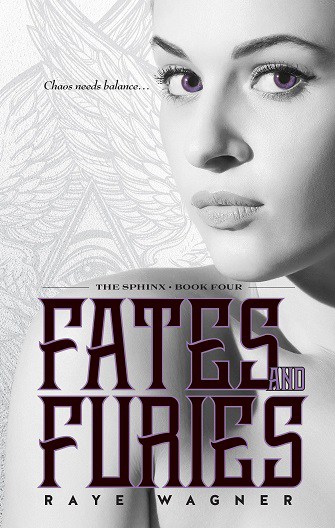 The Olympian gods have caused Hope nothing but chaos…

Hope escaped the Underworld with her life, but her memories are as blank as the Book of the Fates she brought back. Still determined to break the curse, she and Xan take an offering to the Olympian temple to solicit the goddess Artemis for aid. But the petition has disastrous results, and now the gods are hunting her.

Athan sacrificed everything for Hope, but she’s leaving him behind to travel with Xan to Mount Olympus. But the closer they get, the more Athan’s mortality becomes a liability. Forced to seek refuge in mists and darkness, Athan tangles with deities that weave the very threads of fate. But these goddesses also wield the immortal blades that lay ruin to destinies.

With everyone she loves damaged or destroyed by the blood of Olympus, Hope must face the power of the past to change the fate of her future.

Origin of the Sphinx
Son of War
Daughter of Darkness

Raye Wagner writes young adult urban fantasy with a Greek mythology twist. She's a big fan of both the Percy Jackson series (shocker) and the Twilight saga (gasp), and those two series *might* have led her to pursue her dream of writing teen fiction.

Raye's a big believer in realistic characters and draws on her background in healthcare to ensure that her strong protagonists are believably flawed and act rationally. She loves reading YA romantic fantasy so there's bound to be some kissing in her books. That being said, Raye writes for all ages, so it's clean romance. ;) Raye also relies heavily on her martial arts training to pen realistic fight scenes (3rd degree black belt in Tae Kwon Do) with believable consequences.

Posted by MissDaemon at 9:15 AM