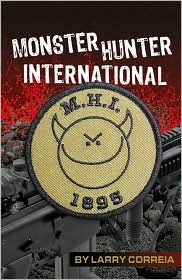 Five days after Owen Zastava Pitt pushed his insufferable boss out of a fourteenth story window, he woke up in the hospital with a scarred face, an unbelievable memory, and a job offer.

It turns out that monsters are real. All the things from myth, legend, and B-movies are out there, waiting in the shadows. Officially secret, some of them are evil, and some are just hungry. On the other side are the people who kill monsters for a living. Monster Hunter International is the premier eradication company in the business. And now Owen is their newest recruit.

It's actually a pretty sweet gig, except for one little problem. An ancient entity known as the Cursed One has returned to settle a centuries old vendetta. Should the Cursed One succeed, it means the end of the world, and MHI is the only thing standing in his way. With the clock ticking towards Armageddon, Owen finds himself trapped between legions of undead minions, belligerent federal agents, a cryptic ghost who has taken up residence inside his head, and the cursed family of the woman he loves.

My husband has been telling me for months to start this saga. He went through the audiobooks in a blink of an eye.

I can see why he enjoyed it so much. I did too. After all, what's not to like about a fantasy involving a great evil, monster killing, and a hero stopping an Apocalypse? It's usually, the best recipe for a great adventure IMO.

For a gun aficionado, this series is heaven. Owen is a sharp shooter and he knows every gun that is cool out there (me: I have no idea about any of that). His dad who was in the military, taught him early on to defend himself in hand to hand combat and to become familiar with guns. Owen, now an accountant, enjoys his guns as a hobby and tries to lead a pretty dull life. This is until his boss becomes a werewolf and wants to eat him.

After surviving the attack, Owen finds himself getting a new job offer.  He could return to his (boring) job or he can train and become part of the secret group called Monter Hunter International who takes care of the bad monsters who are hiding in plain sight. Yes, vampires, werewolves, gargoyles do exist and someone has to take them out. The Government knows about their existence but they don't want the public to panic.

Suddenly, Owen's life gets very complicated. He has a very lucrative but extremely dangerous new job.

Monster Hunter International is a cool fantasy. It has a set of very unique characters.
In regards to the romance, I wasn't sure about Julie's character, Owen's love interest, but she grew on me. By the end, I couldn't see him with anyone else.