Trapped in Wonderland by Dani Hoots 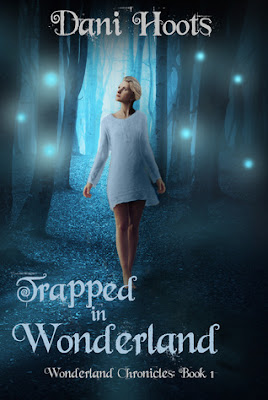 Meredith Alice Hughes has found herself falling through a portal and into Wonderland. There, she finds some of her classmates, who are actually fictional characters from Lewis Carroll’s “Alice’s Adventures in Wonderland”, and they use a potion to make her forget everything. Everything would have been fine, that is, until the White Rabbit tries to murder her and she finds herself in Wonderland once more.

Apparently, according to a prophecy, Alice is the only one who can save Wonderland from the Cirque de Rêves, a group that is trying to destroy and takeover the world. Little does Alice know that not only is Wonderland in danger, but her home world as well, because all the citizens in Wonderland represent the dreams of every living human in the real world, and when they start to disappear, so does the hope of every living thing. Will Alice believe in herself enough to defeat the Cirque de Rêves? Or will she fall victim to the dark thoughts that reside in her heart?

I hate it when you are really excited for a book and then it just falls flat. I am so disappointed that that was the case with this book. I want to clarify that I don't think this author is a bad author by any means. I think with some fine tuning, this book could become a really entertaining novel! I thought the premise of this book sounded extremely interesting. I loved the idea of a re-imagined Wonderland that was being taken over by an evil circus. This just SCREAMED something I would love. I really love the concept that the author came up with, and I think with some tuning, this world could be amazing. I just felt like the world lacked the world building I was looking for. A lot of things in this book felt like they were explained in "info-dumps", which made it hard to fully grasp the world the author created. I am hoping the sequel will go into more world building, but do it at a slower pace.The main character, Alice, was okay. I enjoyed her humor at times and she had some great sassy comments. However, she usually came off as very naive and immature. I know she was young, but she felt like she should have been just starting middle school instead of high school. I had a hard time connecting to her, which made it hard for me to root for her. Alice was also WAYYYY too accepting of everything she was experiencing. I feel like she definitely should have been a little more freaked out, especially in the beginning of the book. I thought the romance Alice had in this book was a little lackluster. It had it's cute moments, but it was kind of underwhelming and cheesy at times. The romance lacked the tension I was craving. I think part of the reason the romance didn't really grab me was because I felt like I didn't know anything about her love interest. The romance seems to have a potential to become more swoon-worthy, so I hope the author takes advantage of that in the next book.I will say that I did enjoy all the different friendships in this book. I was glad that the author made sure to include friendships and not just romance in this book. Unfortunately, due to the clunky world building, awkward dialogue, and immature characters, I did not connect to this book. I can see this book series having a lot of potential to grow into a fun and action pack fantasy series! However, this book just wasn't for me and I don't see myself continuing this series.

1 / 5 Fangs*This ebook was given to me in exchange for an honest review. *
Posted by MissDaemon at 11:30 AM