The Turn by Kim Harrison 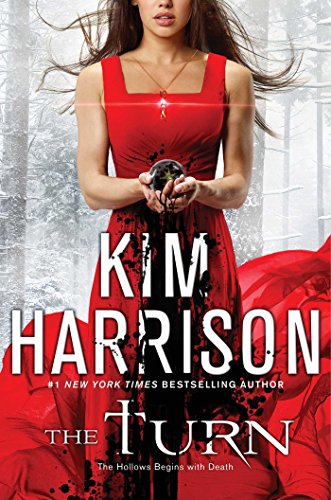 Kim Harrison returns to her beloved Hollows series with The Turn, the official prequel to the series that will introduce fans and readers to a whole new side of Rachel Morgan's world as they've never seen it before!

Can science save us when all else fails?

Trisk and her hated rival, Kalamack, have the same goal: save their species from extinction.

Death comes in the guise of hope when a genetically modified tomato created to feed the world combines with the government's new tactical virus, giving it an unexpected host and a mode of transport. Plague takes the world, giving the paranormal species an uncomfortable choice to stay hidden and allow humanity to die, or to show themselves in a bid to save them.

Under accusations of scientific misconduct, Trisk and Kal flee across a plague torn United States to convince leaders of the major paranormal species to save their supposedly weaker kin, but not everyone thinks humanity should be saved.

Kal surreptitiously works against her as Trisk fights the prejudices of two societies to prove that not only does humanity have something to offer, but that long-accepted beliefs against women, dark magic, and humanity itself can turn to understanding; that when people are at their worst that the best show their true strength, and that love can hold the world together as a new balance is found.

As a huge "Itchy Witchy" fan, I was dying to read The Turn. First, there was the cover lust. Can you believe how awesome this cover is? I just had to have it!

The Turn is a prequel to the Hollows series. It probably starts about fifty years before we meet Rachel Morgan in Dead Witch Walking, so there's no Rachel. Instead, we get to meet Trent's parents: Elyotrisk Cambri (who goes by Trisk) and Trent L. Kalamack (who goes by Kal).

Trisk and Kal hate each other. They were classmates and Trent made her life miserable. Trisk's a very smart dark elf and due to Kal's interference in school, she almost doesn't get offered a job after graduating. In the end, she's sent by the Elven Enclave to spy on Dr. Daniel Plank's research. Daniel's a human who has created a virus which can make people sick without killing them and the Inderlanders (supes) want to make sure it's safe for them as well. After three years of Daniel and Trisk working together and both succeeding in their research, Trent is sent to oversee the procedure.

For those who have read the Hollows and have met Trent (the son), we know he can be selfish, power-driven and arrogant. Well, his daddy is ten times worse. Only a couple of times, he wasn't a total bastard. His jealousy and desire for recognition were his downfalls.

Trist was not very different from Rachel. She was living in the sixties and she was trying to get her name out. It was hard for her because she was a woman but also because she was a dark elf. It didn't matter that she was a geneticist. She still had to break down biases and fight in a world dominated by men.  She wanted to help the world. She created the T4 Angel Tomato which could end famine since it was immune to drought and disease. She cared for Quen and Daniel and I do believe in a strange way she cared for Kal.

It was wonderful going back to the Hollows world and revisiting such great characters like Al and Quen. The Turn also introduces a very cool pixie, Orchid. She didn't have as much of Jenks's foul language but she was feisty.

I hope we get more books!

A complimentary copy was provided by Gallery Books via Netgalley in exchange for an honest review.
Posted by MrsLeif at 8:10 AM