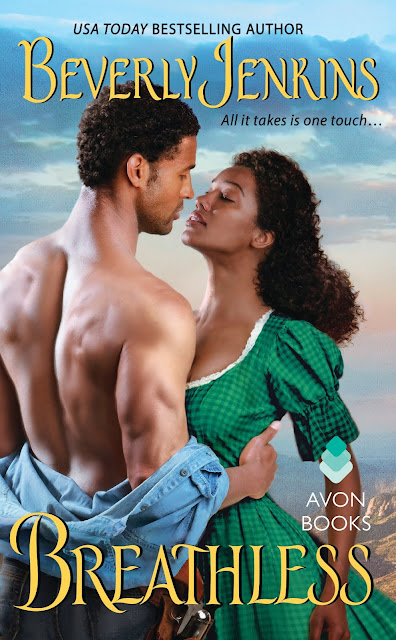 A strong-willed beauty finds herself in the arms of the handsome drifter from her past, in this second book in the sizzling series set in the Old West, from USA Today Bestselling Author Beverly Jenkins

As manager of one of the finest hotels in Arizona Territory, Portia Carmichael has respect and stability—qualities sorely missing from her harsh childhood. She refuses to jeopardize that by hitching herself to the wrong man. Suitors are plentiful, but none of them has ever looked quite as tempting as the family friend who just rode into town…and none has looked at her with such intensity and heat.

Duchess. That’s the nickname Kent Randolph gave Portia when she was a young girl. Now she’s a stunning, intelligent woman—and Kent has learned his share of hard lessons. After drifting through the West, he’s learned the value of a place to settle down, and in Portia’s arms he’s found that and more. But convincing her to trust him with her heart, not just her passion, will be the greatest challenge he’s known—and one he intends to win…


A NOTE FROM
Beverly Jenkins

This is the second book in the Rhine Trilogy and I do hope you enjoy it. With all the issues and heartache Portia carried inside, I knew it would be difficult for her to give her heart to someone, but Kent Randolph proved to be the man for the job, even if I didn’t know he would be her hero when the story began. Hope you’ll enjoy seeing Rhine and Eddy from Forbidden and, yes, they are still very much in love.

The Fontaine Hotel is loosely based on the Mountain View Hotel founded in Oracle, Arizona, in 1895 by Annie Box Neal and her husband William “Curly” Neal, who were both of African- American and Native-American descent. The Mountain View was a combination hotel and spa and catered not only to European royalty but to wealthy visitors from places like Russia, Australia, and China, too. Look them up.

The great Apache chief Geronimo surrendered on September 4, 1886, and was promptly declared a prisoner of war. He and his people eventually wound up in Florida along with the Apache scouts the army employed to hunt him down. He died at Fort Sill, Oklahoma, in 1909. The Apache warrior Lozen, also captured in 1886, was sent to the barracks at Mount Vernon, Alabama, where she died of tuberculosis in 1887. Although her name has faded from America’s memory, her bravery and fearlessness remains legendary with her people.

I only touched briefly on African-American women and the fight for suffrage but hope to get back to it in depth sometime in the future. Until then, if you’d like to do some research on your own, here are two excellent sources:

Having the opportunity to create characters and stories that reflect my heritage as a woman of color is priceless. Representation matters.  Thanks again for the support and love. Thanks also for spreading the word about my books to everyone you know. It’s much appreciated.

Until next time, happy reading.
B.

Portia saw the curiosity on the faces of some of the other people seated nearby and wondered if sitting with Kent would cause gossip, but she went ahead and told him about Eddy and the other ladies leaving her to help in the kitchen.

She smiled ruefully. “Let’s just say I’m better with numbers than I am with pots.”

He shrugged. “If it’ll keep you from starving to death, I suppose I can make myself available, if called upon.”

She wondered if he had this effect on all women.

“How’s the managing of that passion going?” he asked.

Her heart thumped. “Fine.” His eyes were so piercing, she trembled in response.

She leaned closer so they wouldn’t be overheard. “I am not. One kiss was all I needed and now I’m fine, just as I said I would be.”

“Duchess, your uppity mouth’s been wanting another taste all day.”

Heat sent her senses galloping. “It has not, and stop calling it that.”

“Okay. Your sweet mouth has been wanting another taste all day.”

She almost keeled over. “I do like those high-collared blouses you wear.”

She looked down at herself.

“Makes me want to undo all the little buttons and see how you manage with my kisses against your bare throat. Curious about what scent you place there, too.”

“Okay. Just something for you to think about later. Do you want the legs or the wings?”

Her mind was stuck like it had stepped in tar. How in the world was she going to remain unmoved by his teasing ways without wanting to box his ears or wonder how his kisses would feel against bare throat?

“We have only one set of flatware. Shall I feed you or do you want to feed me?”

Scandalized by the suggestion, she forced herself not to glance around to see how closely they were being observed. “Neither,” she said. “I’ll have the wing. You can eat the rest.” 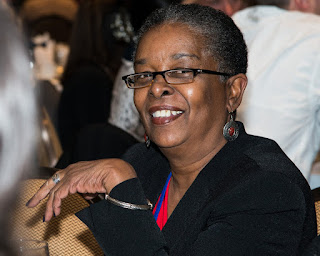 Beverly Jenkins is an African-American historical romance writer. She and her family live in southeastern Michigan. Born in Detroit, she graduated from Cass Technical High School and attended Michigan State University where she majored in Journalism and English Literature.
Ms. Jenkins has written sixteen books to date and has received numerous awards for her works, including: the Detroit Free Press Book of the Year, three Waldenbooks Best Sellers Awards; two Career Achievement Awards from Romantic Times Magazine; a Golden Pen Award from the Black Writer’s Guild, and in 1999, Ms. Jenkins was voted one of the Top Fifty Favorite African-American writers of the 20th Century by AABLC, the nation’s largest on-line African-American book club. In May of 2002, Ms. Jenkins published her first historical novel for young adults, titled: Belle and the Beau. Her second YA, Josephine and the Soldier followed in 2003.
Ms. Jenkins has been featured in many national publications, including the Wall Street Journal, People Magazine, Dallas Morning News and Vibe Magazine. She has lectured at such prestigious universities as Oberlin University; the University of Illinois; and the University of Michigan. She speaks widely on both romance and 19th century African-American history at libraries, schools and organizations including Romance Writers of America, and the Afro–American Historical and Genalogical Society. She is active in her church and community, and in November 2001 was a recipient of the YWCA Woman of Achievement Award.