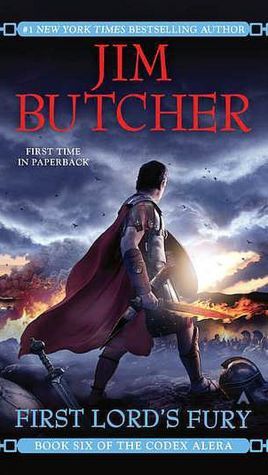 For Gaius Octavian, life has been one long struggle. Battling ancient foes, forging new alliances, and confronting the corruption within his own land, he became a legendary man of war and leader of men - and the rightful First Lord of Alera.

Now the end of all he fought for is clost at hand. The brutal, dreaded vord are on the march, using fear and chaos to turn the Alerans against one another, and forcing those who will not submit to flee to the outer reaches of the Realm.

Perhaps for the final time, Gaius Octavian and his Legions must stand against the enemies of his people. And it will take all of his intelligence, ingenuity, and furycraft to save their world from eternal darkness...

What a perfect ending to this series! Don't get me wrong not everything is picture-perfect. Alera, and Canim have lost so much. It will take years to get back to normal but if somebody can accomplish it, Tavi can.

So what happens in the First Lord's Fury:

Tavi, now the First Lord of Alera is preparing to engage the Vord Queen. He knows killing her is the only way to save his people and the Canim, Marat, and Iceman. If he doesn't she will decimate them all. Thankfully, Tavi is not alone in this fight against the Vord.

Tavi is returning to Calderon, where his adventure began. He wants to help his uncle Bernard, who's been preparing for this fight for years after meeting the Vord for the first time.  Lord Aquitane is fighting for Alera while his wife is fighting for the Queen.

In the hive, Isana and Araris are planning their own escape.

I love how the main players are all coming together. The remaining High Lords will do whatever is necessary to keep the Vord out. There are so many losses throughout the series.

“A good man, almost by definition, would seriously question any decisions he made that led to such terrible consequences for others. Especially if those others trusted him.”

My favorite character besides Tavi is Kitai. She's exceptional. She's a strong warrior who won't let Tavi sacrifice himself alone. She's his match in every sense.

"Death is nothing to me, chala. Not if we are together. Death is not to be feared."

I can't believe I have to say goodbye to this series. I know it's wishful thinking to get one more book. There's certainly enough material left for Jim Butcher to give us more. I won't lose hope. In the meantime, I can relisten to the audios.