Someone to Hold (Westcott #2)
by Mary Balogh 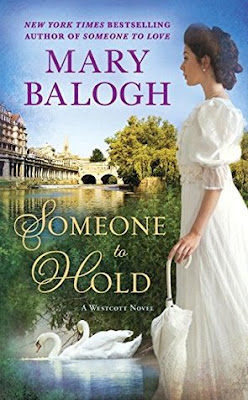 Humphrey Wescott, Earl of Riverdale, has died, leaving behind a fortune and a scandalous secret that will forever alter the lives of his family—sending one daughter on a journey of self-discovery...With her parents’ marriage declared bigamous, Camille Westcott is now illegitimate and without a title. Looking to eschew the trappings of her old life, she leaves London to teach at the Bath orphanage where her newly discovered half-sister lived. But even as she settles in, she must sit for a portrait commissioned by her grandmother and endure an artist who riles her every nerve.An art teacher at the orphanage that was once his home, Joel Cunningham has been hired to paint the portrait of the haughty new teacher. But as Camille poses for Joel, their mutual contempt soon turns to desire. And it is only the bond between them that will allow them to weather the rough storm that lies ahead...

Someone to Hold was a charming and fluffy read. This was a story about two lonely people who learned to let people in and love them, which was a nice story to read about. It was a sweet romance book that was light on the drama. One issue I had with this book was that it felt very slow. I felt like parts of this book could have been condensed for a more even-flowing plot. A lot of the romantic parts were very enjoyable, so those were definitely my favorite moments of the book. I didn't read the previous book in this series, which was a mistake on my part! Due to that, it was hard for me to keep track of who was who. So, I would recommend reading book one before picking up this book! Camille was hard to like at first. She was a bit stiff and too proper for my taste. It was hard to relate to her at first. However, as the book progressed, her motives and reasonings were easier to understand, which made her more likable. I was rooting for her to get her happy ending by the end of the book! Joel was a swoon-worthy and kind man. He was a sweetie, and I loved how he was able to see past Camille's hard exterior. He was the perfect match for Camille! Overall, I thought entertaining and romantic book. If you are looking for a new historical romance series, then I would recommend checking this series out!