Ex-special forces ranger Dylan McCourt is a stone cold killer who cares only about his military brothers and doing what’s right. He’s used to giving orders and has zero patience for bullshit. Most people tremble when they look him in the eye, but not his infuriatingly sexy new rescue mission, Jessie Lyon. She just juts her chin and says she’s not leaving without clearing her father’s name, to hell with his rules. And was that a one finger salute he sees in her eyes or his imagination? Either way, he knows this is one job his training might not have prepared him for.

For fans of Maya Banks’ KGI series, prepare to meet the men of the Delta Force Brotherhood, a sexy new contemporary series where kicking ass and living hard is just how they roll.

He got to his feet and stretched out, feeling a familiar hum through his muscles in anticipation of getting to business.
It took a second to find a fresh T-shirt in the duffel bag, his other one damp from Jessie’s hug.
Dylan pulled it on, trying not to think too much about how she felt in her arms. He didn’t want the distraction. He didn’t need the distraction.
But, Lord…she’d felt so good and right.
He walked to the rear of the mobile home and tugged back the curtain serving as a door for the bedroom.
Jessie lay there on the single mattress, sound asleep. One hand was tucked under her cheek, her face slightly obscured by her long, blond curls. Her other hand was tucked between her legs, her knees pulled up almost to her chest. There was a softness in her features, the hardcore professional mask slipping away and letting the woman show through.
Warmth spread through his chest. It was hard to suppress the urge to drop onto the bed and pull her into his arms, to kiss the top of her head before moving on to kiss other parts of her body.
Strong. Smart. Sexy.
He couldn’t fault her reasoning, no matter how much he wanted to. She’d seen an injustice inflicted on her family and tried to work within the system to right the wrong. But when she couldn’t, she’d pursued her own path.
Much like he and his men did.
Dylan pushed the thought away. There’d be time later to ruminate on Jessie Lyon and what part she could have in his life. Right now they needed to get up to Mount Charleston, to the cabin the Brotherhood kept for retreats.
He went to the front of the trailer, away from temptation.
A pair of headlights illuminated the small road sign at the end of the lane for a few seconds before going black.
Dylan reached out and flicked the light switch, plunging them into darkness. He peered out the window as the car turned down the road, the engine going silent.
Could be somebody with a wonky car, the engine cutting out and the driver hoping for enough momentum to coast all the way home.
Could be something else.
The driver’s window came down as the car came level with the darkened trailer and something flew out.
It wasn’t a flurry of bullets.
It was much, much worse.

Sheryl Nantus is an award-winning romance writer published by Entangled, St. Martin's, Samhain, and Harlequin's Carina Press. When she's not writing about hunky heroes, she is sipping tea, playing board games and writing haiku. A total fangirl at heart, she met her husband through an online fanfiction community and currently lives in Pennsylvania. 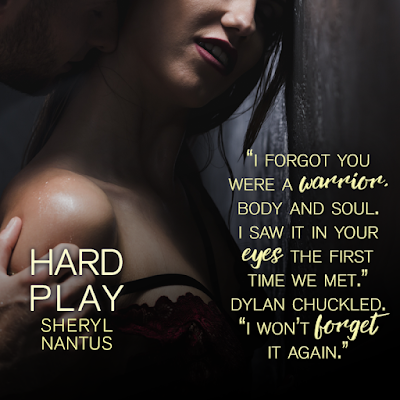