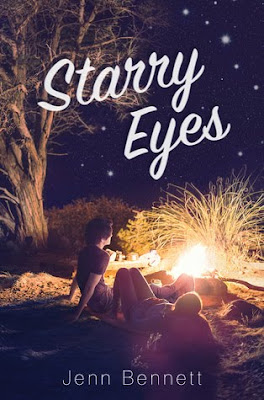 Ever since last year’s homecoming dance, best friends-turned-best enemies Zorie and Lennon have made an art of avoiding each other. It doesn’t hurt that their families are the modern day, Californian version of the Montagues and Capulets.But when a group camping trip goes south, Zorie and Lennon find themselves stranded in the wilderness. Alone. Together.What could go wrong?With no one but each other for company, Zorie and Lennon have no choice but to hash out their issues via witty jabs and insults as they try to make their way to safety. But fighting each other while also fighting off the forces of nature makes getting out of the woods in one piece less and less likely.And as the two travel deeper into Northern California’s rugged backcountry, secrets and hidden feelings surface. But can Zorie and Lennon’s rekindled connection survive out in the real world? Or was it just a result of the fresh forest air and the magic of the twinkling stars?

Star-crossed lovers? Stranded by themselves in the wilderness? Exchanging witty jabs and insults? JENN BENNETT IS THE AUTHOR? SIGN ME THE HECK UP!!! MY BODY IS READY!!!!

It is easy to say that I went into this book with high expectations, and it DID NOT DISAPPOINT! My heart is full of rainbows and sunshine. I feel like I could die from happiness, I enjoyed this book THAT much!I loved the writing style and pacing in this book. I read this book in one sitting and I have zero regrets. This book sucked me in from the first page and I never wanted it to stop! The setting of this book was definitely unique for contemporary novels, and I enjoyed every moment of it. The wilderness setting added such a mysterious and exhilarating element to this story!One of the best things about this book was the characters. All of the characters were so fleshed out and so very human. Every character was unique, memorable, well-developed, and flawed in the best way. Each character genuinely seemed like someone I have encountered in my life. Every interaction between the characters, whether they were just talking, joking, or even arguing, felt so believable. Jenn managed to make everything feel so realistic and not forced in the slightest. The main character, Zorie, was an unapologetically quirky and lovable character. She was someone who had to plan out every element of her life, and she would get stressed out whenever something did no go to plan. So, she definitely got a bit stressed during this book. However, as the story progressed, Zorie learned that there are some things that you can't plan and that is okay! Watching her discover that was a fun and relatable storyline. I also liked how hilarious Zorie was! Zorie's witty inner dialogue made laugh out loud SO many times. Zorie was a character loved from beginning to end. I WANT TO BE HER AND BE HER BEST FRIEND AT THE SAME TIME.Lennon is the other main character, and I ADORED HIM. Lennon was a snarky, moody, and sullen guy. That is my kryptonite when it comes men in books, so I was on the Team Lennon train from the first page he appeared on. PLUS, HE LOVES TO HIKE. HOW FREAKING ADORABLE IS THAT?!?! Anyway, I thought Lennon was such an interesting character because there was so much more to him than what met the eye. Even though he was a sarcastic and kind of dark guy, he was so soft, loving, and understanding underneath all of that. There were so many sides to him and I loved watching those sides get exposed as the story progressed. The romance in this book really messed with my emotions, because I WAS SO FREAKING INVESTED. From the first time Zorie and Lennon had a snarky interaction, I knew this romance was going to be the death of me. Their enemies to lovers romance mixed with it being forbidden was the trope of my dreams. There was a lot of history between Zorie and Lennon, and they had A LOT of things to work out. However, the angst was well worth it, because the romantic and sweet moments were PERFECT. The progression of their relationship was wonderfully paced and so realistic. Also, the chemistry between Zorie and Lennon was incredible. I was constantly screaming at them to kiss! I SWOONED SO HARD WHEN THEY EVENTUALLY KISSED AND I POSSIBLY SHED A TEAR OF JOY. Even though the romance was a large element of this story, the author made sure it wasn't the only plot line. The characters deal with conflict within themselves, with their families, and with their friends. It was refreshing to see that those issues were never pushed to the side, and were constantly addressed and pushed through.If you are looking for a contemporary romance novel full of memorable characters, witty and hilarious dialogue, swoons, adventure, self-discovery, forgiveness, enemies to lovers romance arcs, enemies being suck in the wilderness together, snark, sex positivity, supportive parents, realistic angst, and heart-stopping kisses, then THIS IS THE BOOK FOR YOU!!!!!

5 / 5 Fangs*This ebook was given to me in exchange for an honest review. *