One and Only by Jenny Holiday 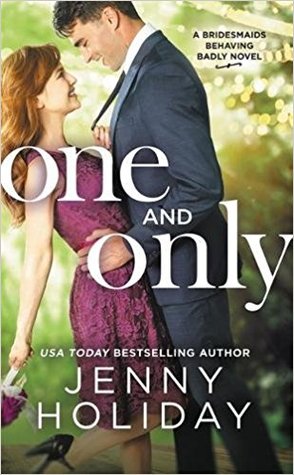 With her bridezilla friend on a DIY project rampage, bridesmaid Jane Denning will do anything to escape - even if it means babysitting the groom's troublemaker brother before the wedding. It should be a piece of cake, except the "cake" is a sarcastic former soldier who is 100% wicked hotness and absolutely off-limits.

Cameron MacKinnon is ready to let loose after returning from his deployment. But first he'll have to sweet talk the ultra-responsible Jane into taking a walk on the wild side. Turns out, riling her up is the best time he's had in years. But what happens when the fun and games start to turn into something real?

"Open your eyes and jump."

One and Only is a delightful wedding romance story.

Jane Denning is one of the bridesmaids. She's known as the dependable one. Her friends know they can count on her. She's mature and behaves like a mom at times. Her friend Elise is getting married and she has been given the job of babysitting the groom's brother, Cameron, the black sheep of the family. At first, she couldn't care less about Cameron, he seems to be exactly what people believe of him but the more time she spends with him, the more she can't reconcile what he shows her with what she thinks she knows of him.

Cameron MacKinnon has been discharged from the Canadian military. He has done two tours in the Middle East and has the psychological scars to prove it. Now that he's back home he wants nothing more than to eat a nice piece of steak, enjoy the view from the tallest building and have sex with a willing woman.  Much to his surprise, he finds Jane at the airport waiting for him and interfering with his plans. So in order to accomplish the items on his list, he will drag her out with him. This is when he notices that "plain Jane" is the farthest thing from the truth.

Like I said earlier, a really cute love story. Jane is a nerd, a writer of a YA fantasy. She dresses in comfort and likes to play it safe. Yet, when Cameron pushes her to do the things that scare her, she's willing to let herself go. Her character continues to bloom throughout the story. Cameron suffers from low self-esteem and what's worse, he lets his family and friends think the worst of him. Many times he could have explained past events but he believed he wasn't worth it until Jane shows him differently.

There was one scene where I cringed although I knew something similar was coming. Thankfully, the rest of the characters were there to set Cameron straight.

I can't wait to read the next Bridesmaids Behaving Badly!

"You're already a swan."

A complimentary copy was provided by Forever via Netgalley in exchange for an honest review.
Posted by MrsLeif at 7:33 PM