Sky in the Deep by Adrienne Young 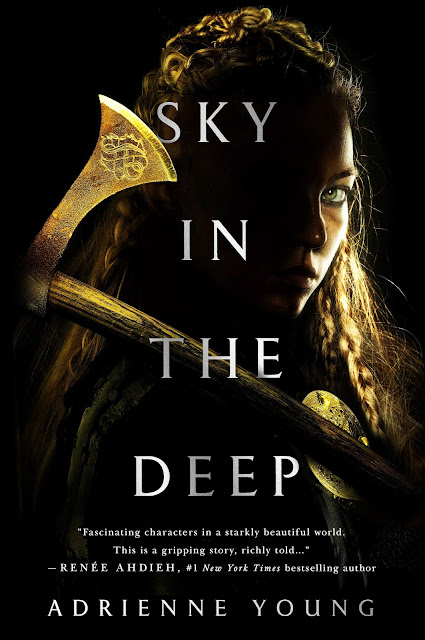 Raised to be a warrior, seventeen-year-old Eelyn fights alongside her Aska clansmen in an ancient rivalry against the Riki clan. Her life is brutal but simple: fight and survive. Until the day she sees the impossible on the battlefield—her brother, fighting with the enemy—the brother she watched die five years ago.

Faced with her brother's betrayal, she must survive the winter in the mountains with the Riki, in a village where every neighbor is an enemy, every battle scar possibly one she delivered. But when the Riki village is raided by a ruthless clan thought to be a legend, Eelyn is even more desperate to get back to her beloved family.

She is given no choice but to trust Fiske, her brother’s friend, who sees her as a threat. They must do the impossible: unite the clans to fight together, or risk being slaughtered one by one. Driven by a love for her clan and her growing love for Fiske, Eelyn must confront her own definition of loyalty and family while daring to put her faith in the people she’s spent her life hating.


"Young’s brutal, emotional debut is set in a land that is as unforgiving as its people. The strongest aspect of Young’s work is the world building; she packs it with details that viscerally pull the reader into Eelyn’s world. Young has alsopopulated this world with complicated characters who evolve as readers get to know them. Even better, the theme at the core of the story—overcoming prejudice and unifying to fight a greater threat—resonates with current real-world issues. With its gorgeous prose and epic battle scenes, fantasy lovers will be easily satisfied." —Booklist 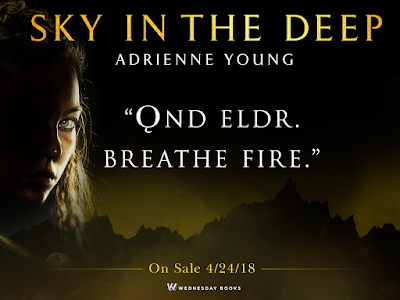 "Young has woven a Viking tale of blood, gore, and love that keeps the pages turning. The author has taken Norse mythology and made it accessible to young adults. The characters are all fully developed, and teens will be rooting for them to succeed. With a little bit of a love story, there is enough action, blood, and gore to engage reluctant readers. A refreshing tale where life is tested and people have to overcome their differences to fight a bigger foe to survive. A fast-paced, action-filled fantasy for all YA collections." —School Library Journal

Sky in the Deep was an addictive, enthralling, and captivating novel! THIS BOOK WAS EVERYTHING I EVER WANTED! THIS IS THE FEMALE VIKING BOOK I HAVE BEEN WAITING FOR!!!Eelyn, the main character, was such a badass yet completely relatable character. There was so much depth to her character and I loved the development she had throughout the story. She was such a dynamic and well thought out character that I loved immensely. I wish more YA characters were like her. I am trying to avoid spoilers about Eelyn, but just know that she is incredible and everyone will love her. EELYN IS MY WARRIOR QUEEN THAT I WILL WORSHIP FOREVER!!! SHE IS A BADASS THAT WILL NOT BE TOLD WHAT TO DO AND WILL FIGHT FOR WHAT SHE BELIEVES IN!!! I LOVE HER!!!

I don't want to spoil anything about the plot of this book, because this is definitely one of those books where it is better going in knowing nothing. The whirlwind plot of this book mesmerized me and kept me glued to the pages. The book was perfectly paced so that even during the scenes with no action, I still felt the high-stakes pressure! Also, the inclusion of the Vikings and their clans was SO INTERESTING. I loved learning about the different clans and the wars going on between them. I was completely engrossed by the world and the characters. The action scenes in this book were EPIC! I GENUINELY FELT LIKE I WAS IN THE MIDDLE OF THE BATTLES AND I COULD VISUALIZE THE BADASSERY TAKING PLACE RIGHT BEFORE MY EYES! Adrienne clearly has a talent for writing, especially epic battle scenes. It wouldn't be a book review if I didn't talk about the romance, and LORDY I LOVED THE ROMANCE. The romance in this book was a slow-burning enemies-to-lovers type romance. I ATE THIS ROMANCE UP! The romance was passionate, sexy, and perfectly paced. The romance wasn't a huge plot point, which was nice because it never took over the main plot of the story. The relationship was something small on the side that only enhanced the plot, which is the best kind of romance in a fantasy book. GIVE ME MORE OF THE SLOW-BURNING PERFECTION OF THIS COUPLE, PLEASE!!!

I could go on and on about this book, but I don't want to drone on or accidentally spoil anything. So, if you are looking for a gripping YA novel with Vikings, badass women, relationships that punch you in the feels, unforgettable characters, and an enemies-to-lovers romance, THEN THIS IS THE BOOK FOR YOU!5 / 5 Fangs*This ebook was given to me in exchange for an honest review. *
Posted by MissDaemon at 8:30 AM