No Contest by Harper St. George and Tara Wyatt 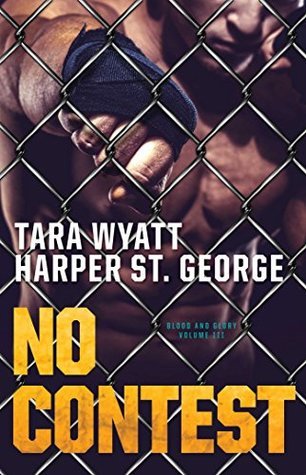 Perfect for fans of Katy Evans, this third book in the sizzling and electrifying Blood and Glory series reveals that sometimes, the power of temptation is stronger than the pull of a championship belt.

Leandro Oliveira—hunky MMA fighter, playboy billionaire, and newly crowned champ of the World Fighting Championship’s light heavyweight division—is used to getting his way. But when his party lifestyle threatens to cost the WFC sponsors, he has to clean up his act or he’ll be stripped of his contract. Forced to give up late nights of booze and women, Leandro resents having to change his behavior—until he lays eyes on the sexy publicist hired to manage his image. He plans to seduce her to regain control of the situation, but falling for her wasn’t supposed to be part of the deal.

Freelance publicist Ashylynn Fields has never taken on a client she wasn’t certain she could handle. But her latest project might just be the guy who kills her perfect record. Between his sex tape, his exploits at strip clubs, and his nights spent street racing expensive sports cars—not to mention his smoldering good looks and near constant flirting—Leandro might prove to be impossible. But with a full-time position with the WFC on the line, Ashlynn is more determined than ever to ignore his good looks and charm, and get this bad boy on the straight and narrow. Not only is he her client, but he’s completely wrong for her. When the chemistry between them explodes, she’s left wondering: how can the wrong man feel so right?

No Contest is an irresistible, emotionally charged read that proves once again that Harper St. George and Tara Wyatt always bring “tons of emotion and heat” (Molly O’Keefe, USA TODAY bestselling author) to their novels.

No Contest is book 3 in the Blood and Glory series. However, it can be read as a standalone.

Leandro Oliveira is an MMA fighter and recently the Champion in the light heavyweight classification. He's also as entitled as he can be. He believes he can do whatever he wants. From a sex tape to fights in a strip club, to doing illegal racing. He doesn't think the rules apply to him since he's a trust fund baby and great as an MMA fighter. His ego needs his own zip code. But when the sponsors threaten to walk away unless he cleans up his act and a PR publicist is hired to babysit him, his first thought is to sleep with her in order to make her do what he wants. Nonetheless, when she keeps on turning him down, his interest in her only deepens.

Ashylynn Fields is the new PR publicist hired to help change Leandro's image. She knows she has her hands full after she meets him for the first time. It doesn't help that he continues to hit on her. Yet, as they are sent to have interviews in different states, she's forced to spend more time with him. She starts seeing the other parts of Leandro no one else knows. Those ones are what makes her start falling for him. But, Ashylynn has a choice to make, losing the possibility of a permanent job at the UFC or choosing Leandro since there's a very specific clause preventing them from being together if they are discovered.

No Contest had one thing that prevents me from loving it. I don't like insta love novels and this book has an insta love feel to it. Just after a few encounters Leandro and Ashylynn were falling for each other. Saying that I still enjoyed the ride. They were cute together and I liked seeing a change in Leandro's entitled personality. He became much more likable than in the prior books.


A complimentary copy was provided by Pocket Star via Netgalley in exchange for an honest review.