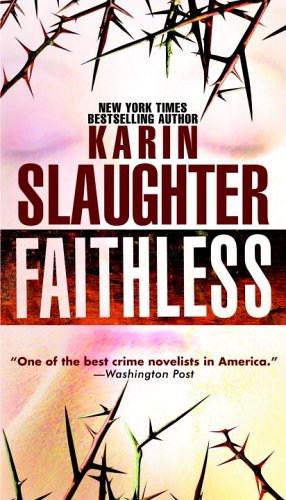 The victim was buried alive in the Georgia woods–then killed in a horrifying fashion. When Sara Linton and Jeffrey Tolliver stumble upon the body, both become consumed with finding out who killed the pretty young woman. For them, a harrowing journey begins, one that will test their own turbulent relationship and draw dozens of life into the case.

For as Jeffrey and Sara move further down a trail of shocking surprises and hidden passions, neither is prepared for the most stunning discovery of all: the identity of a killer who is more evil and dangerous than anyone could have guessed.

Faithless is good but not as great as its predecessor.

A young girl is found dead and poisoned by Jeffrey and Sara while they're out walking while fighting through the woods (what's new, right?).

Jeffrey has recently moved in with Sara when he discovers he might have Hepatitis C after his one indiscretion years ago. Predictably, Sara is upset. She might be infected as well and carrying the virus without knowing it. She wants Jeffrey to be tested again (her cousin has already done a test) when they stumble onto an uneven area making them lose their balance. Soon, they both realize something is under the dirt. After more digging, they find a box and the remains of a young woman. The young woman is Genie, she's part of a weird family with strong religious beliefs were men make decisions and women follow them without questions.

As I said before, I liked Faithless. It had a clever plot with enough action to keep me interested. Unusually, there were not a lot of suspects so it was not difficult to pinpoint the culprit. Yet, it didn't take anything away from the story.

I still love Sara. I think she's brilliant yet not perfect. She's trying very hard to forgive Jeffrey and move forward. I'm slightly terrified as to what's to come up next in the last book. Karin left us with a big foreshadowing at the end of the novel.

I still hate Lena. She has learned nothing. I think Jon Snow knows more than she does. She's nothing but trouble for Sara and Jeffrey as well as for Nan and Greg. Why is she still part of this series???? I can't stand her. She is NOT a good cop. She isn't a good investigator or and definitely not a nice person.

One thing that surprised was some of the prejudices the author brings up into this novel. As an example:

"people tended to homeschool for two reasons: to keep their white children away from minorities or to make sure their kids weren’t taught anything other than creationism and abstinence."

I know plenty of people who are homeschool and is for neither of those reasons (avoiding bullies being the most common) but I digress.....

My friend told me I should start the Will Trent series before I read the last book since both series will connect. So I'm doing just that.