Ace of Shades (The Shadow Game #1)
by Amanda Foody 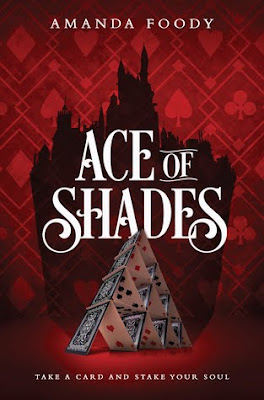 Welcome to the City of Sin, where casino families reign, gangs infest the streets…
and secrets hide in every shadow.

Enne Salta was raised as a proper young lady, and no lady would willingly visit New Reynes, the so-called City of Sin. But when her mother goes missing, Enne must leave her finishing school—and her reputation—behind to follow her mother’s trail to the city where no one survives uncorrupted.

Frightened and alone, her only lead is a name: Levi Glaisyer. Unfortunately, Levi is not the gentleman she expected—he’s a street lord and a con man. Levi is also only one payment away from cleaning up a rapidly unraveling investment scam, so he doesn't have time to investigate a woman leading a dangerous double life. Enne's offer of compensation, however, could be the solution to all his problems.

Their search for clues leads them through glamorous casinos, illicit cabarets and into the clutches of a ruthless mafia donna. As Enne unearths an impossible secret about her past, Levi's enemies catch up to them, ensnaring him in a vicious execution game where the players always lose. To save him, Enne will need to surrender herself to the city…

And she’ll need to play.

AHHH! This was such an entertaining book! I am so excited for more people to read this book!One of my favorite things about this book was the world the author created. The City of Sin was such a dark and intriguing place. I loved learning about the evil that was lurking around every corner. The author's descriptions of the city were so detailed and vivid that I could really picture myself walking the streets with the characters. I also loved the magic system of this world. The idea of the people in this world having two talents based on their family's lineage was so interesting! I thought it was fascinating that the talents and family names also correlated with social class. That was an unexpected element that added another level of creativity and complexity to this immersive world. As much as I loved the world and the magic, I will admit that it was a bit hard to understand at first. I had a hard time wrapping my head around some of the elements of the world since there was SO much to learn. There were times where I just had to accept things even though I didn't fully understand them. However, by the end of the book, I definitely had a strong understand the City of Sin and the magical elements. The ending left me dying to read the second book so I could learn even more about the world!

Another wonderful thing about this book was the characters. I fell in love with all the different characters and wanted nothing but happiness for them. Enne, the main female character, was a character that had such strong growth throughout the story. She went from being a whiny and stuck up girl who was all about etiquette, to a badass queen of the City of Sin. I loved watching Enne transform into the strong girl I knew she could be. I will admit that were times when I felt like she was too good at everything, but I was able to look past it because Enne's transformation was just so cool to read about. Levi was such precious and lovable character. Levi was a bit immoral at times and put up this tough wall for the world to see. I loved reading from his POV and realizing that he was actually a guy who cared A LOT about the people in his life and had a lot of fears too. He turned out to be such a sweet and protective guy! I loved that he was a stone-cold badass on the outside, but warm and gooey cinnamon roll on the inside. ALSO, I LOVED THAT LEVI WAS BI-SEXUAL!!!! LEVI IS MY FAV!! I loved all of the other characters in the book too. They were all so unique, intriguing, and well developed. I cannot wait to learn more about them in the next book!The romance in this book was definitely a slow-burning romance, AND I AM HERE FOR IT. I ship Enne and Levi SO FREAKING HARD. Watching their relationship developed warmed my heart. I WANT THEM TO MAKE OUT AND BE IN LOVE!!!! I know the relationship will take time to fully develop, BUT I AM HERE FOR IT. Their few romantic moments in this book were swoony, so I cannot wait to see how it will be in the next book. IT WILL PROBABLY KILL ME, TO BE HONEST.Overall, this was such an addictive, immersive, and mesmerizing book. I was completely entranced by the story and I never wanted the book to end! This book sucked me in and never let me go. I NEED BOOK TWO, NOW!

4 / 5 Fangs*This ebook was given to me in exchange for an honest review. *
Posted by MissDaemon at 8:30 AM