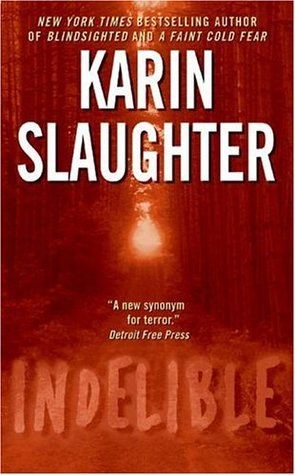 An officer is shot point-blank in the Grant County police station and police chief Jeffrey Tolliver is wounded, setting off a terrifying hostage situation with medical examiner Sara Linton at the center. Working outside the station, Lena Adams, newly reinstated to the force, and Frank Wallace, Jeffrey's second in command, must try to piece together who the shooter is and how to rescue their friends before Jeffrey dies. For the sins of the past have caught up with Sara and Jeffrey -- with a vengeance ...

Indelible is so far my favorite in this series.

It begins with a BANG!

Sara Linton who's the town pediatrician and also the coroner is stopping by the police station to talk to her ex-husband Jeffrey Tolliver when two men enter the station and start shooting. A hostage situation ensues after multiple officers are either killed or hurt.

As the situation progresses at the station, we get to see Lena Adams getting ready to start her first day back as a police officer. It's also her birthday which she usually doesn't celebrate when she gets a call from Frank, her partner who tells her, she needs to get herself to the station ASAP.

While this is happening in the present, Karin takes us back to the past. To a time when Jeffrey first started dating Sara. They have been going out for three months when Jeffrey invites her on a trip to Florida. On their way there, Jeffrey decides to take a pit stop at his old town of Sylacauga. For Sara, this is the first time she's privy to knowing more about Jeffrey's past. She meets his friends and his mother and neither encounter make a good impression on her. Worse, a crime is committed and then the bones of a young woman are found in the cave Jeffrey and his two friends used to frequent. Soon speculations are flying and it's up to Sara and Jeffrey to find the truth.

Indelible had two good storylines which meshed perfectly by the end. We get a lot of information in regards to what made Jeffrey the guy he is now. One of the things I did like about him was that friendship matters to him. It was also nice to see that he did care for Sara. Nonetheless, I'm still on the fence about Jeffrey. One second, Sara is saying how much she loves his integrity and on the next page, he's making a mistake.

As always, I enjoyed Sara. She's still my favorite character. She smart, practical and self-assured.

Lena is still a lost cause. Why is she still in the novels? It makes no sense to me. She's a train wreck with little self-respect and a nasty attitude.