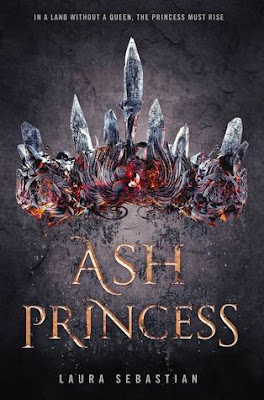 Theodosia was six when her country was invaded and her mother, the Fire Queen, was murdered before her eyes. On that day, the Kaiser took Theodosia's family, her land, and her name. Theo was crowned Ash Princess--a title of shame to bear in her new life as a prisoner.

For ten years Theo has been a captive in her own palace. She's endured the relentless abuse and ridicule of the Kaiser and his court. She is powerless, surviving in her new world only by burying the girl she was deep inside.

Then, one night, the Kaiser forces her to do the unthinkable. With blood on her hands and all hope of reclaiming her throne lost, she realizes that surviving is no longer enough. But she does have a weapon: her mind is sharper than any sword. And power isn't always won on the battlefield.

For ten years, the Ash Princess has seen her land pillaged and her people enslaved. That all ends here.

Ash Princess felt like a book I have read before. There was a girl trying to get her throne back from the villain who stole it, said girl then got the help of a rebellion to take back the throne, and there was a love triangle. So, the bare bones of this book felt very similar to a lot of other YA fantasy novels. However, I still found myself entertained by this story. There was still an addictive quality to this book even though it wasn't completely unique.Overall, I thought this book was well paced and did a good job at keeping my interest. The beginning of this book was a little hard to get into because of all of the information that was introduced, but thankfully, as the book went on, the info-dumps stopped. Throughout the book, I always felt the needed to find out what was going to happen next to the characters and how they were going to overcome the dramatic obstacles thrown their way. This book had A LOT of violence, which got pretty gory at times. I admire that the author took a risk and wrote a YA book that was so dark and violent. It definitely isn't an easy thing to do, but I think the author handled it in a way that kept those scenes interesting and tense. There are also themes of slavery, torture, beatings, rape, and racism in this book. This definitely isn't a light and fluffy book, Ash Princess had many dark elements. Those elements were hard to read about at times. Even though the characters stood up to their abusers, the book felt so dark that was kind of difficult to see the hope even in those moments.The love triangle was an element in this story that was not excited about. I had to try really hard not roll my eyes when I realized a love triangle was being introduced. I, just like most readers, find love triangles so overdone and unrealistic. So, I was really disappointed that a love triangle was present in this book. That being said, I think the author managed to make two relationships that were kind of compelling and interesting in different ways. Do I like love triangles? No, but did I find this love triangle sort of intriguing? Yes. I was not obsessed with the idea of a love triangle in this story, but I will admit that I am curious to see how it will continue to develop. Ash Princess is definitely a dark and page-turning book that readers can get invested in. If you are someone who is a fan of the YA tropes that were presented in this book, then I think it is definitely worth your while to check this book out. 3 / 5 Fangs*This ebook was given to me in exchange for an honest review. *
Posted by MissDaemon at 8:00 AM