The Mission Begins:
At the Edge and Edge of Surrender
by Laura Griffin 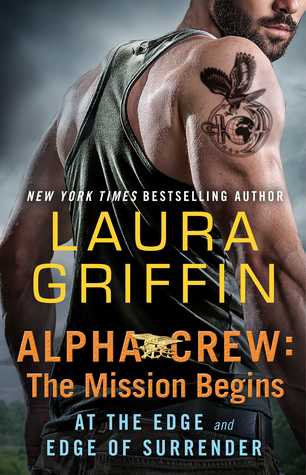 The first two Alpha Crew installments of scorching hot romance between Emma and Ryan are together for the first time in a bundle of sexy, suspenseful adventure!

When Emma Wright’s government plane goes down over the Philippine jungle, she’s forced to survive alone until an ultra-elite SEAL team goes in after her. As the leader of Alpha Crew, Ryan Owen is no stranger to challenges, but he’s never tackled anything quite like this sexy, smart, and resourceful woman. The mission is to get Emma home safely, but danger is everywhere, and Ryan’s unexpected desire for Emma could be a deadly distraction.

Back home in California, Ryan’s mission is over—but Emma’s has just begun. She knows her plane crash was no accident, and she’s determined to uncover the truth about what happened—even if her quest for answers puts her at risk. Torn between duty and desire, Ryan searches for a way win Emma’s heart while protecting her from an invisible enemy who wants her dead.

Ryan had one job: keep Emma safe at all costs. But after a night of passion, Emma takes off and Ryan soon realizes he’s not the only one looking for her. Can he figure out who’s after the beautiful government aide, and why, before she falls into the wrong hands…if she hasn’t already?

Emma’s fighting to get justice for her fallen comrades, but she can’t do it alone. She needs Ryan’s help, but that means trusting him—and dealing with the out-of-control desire blazing between them. Can there be any future for a marked woman and a man trained to kill? She hopes they live long enough to find out…

I love Laura Griffin's books and I knew I had to read The Mission Begins before the next book in the series, Cover of Night was released.

Both novellas, At the Edge and Edge of Surrender, are short but they do pack a punch. They are full of action, suspense, romance, and camaraderie. I have no idea how Laura Griffin is capable of the strong character development in such a short book but she's able to accomplish it! Even better, she's able to make the secondary characters special too.

The main couple in both short stories is Emma Wright and Ryan Owens.

Emma is the daughter of a US Congressman. She has been working as the personal assistant for a US Ambassador's wife for a while. Their latest good deed trip has taken them to the Philippines. When the book begins they are leaving the Philippines when the plane crashes making Emma the sole survivor.

Ryan is the leader of the Alpha Crew unit, a super elite team of Navy Seals. His team is in charge of the search and rescue mission of the plane crash's survivors. Alpha Crew believes hostiles are close by. The sooner they can extract Emma the better.

During this highly stressful situation, Emma and Ryan realize they are attracted to each other but one mistake can be lethal. Distractions are not needed. Ryan tries to keep his distance but nothing else matters when he realizes Emma's life is still in danger when they are both back in the USA.

I loved both novellas. They were so much fun to read. Easily devourable in just a few hours. Ryan and Emma had tons of chemistry. I can understand how things progressed so much faster in a deadly situation like these characters found themselves in. Everything moves faster in this scenario. I like the other members of the team too and I can't wait to read their stories.

Cover of Night is next for me.

A complimentary copy was provided by Pocket Books via Netgalley in exchange for an honest review.
Posted by MrsLeif at 11:30 AM