The Beauty of Us by Kristen Proby 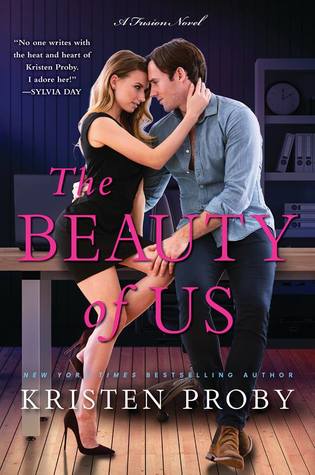 From New York Times bestselling author Kristen Proby comes a sexy, new standalone contemporary romance in her Fusion Series, THE BEAUTY OF US, out now! Grab your copy today and get to know Trevor and Riley!

Riley Gibson is over the moon at the prospect of having her restaurant, Seduction, on the Best Bites TV network. This could be the big break she’s been waiting for. But the idea of having an in-house show on a regular basis is a whole other matter. Their lives would be turned upside down, and convincing Mia, her best friend and head chef of Seduction, that having cameras in her kitchen every day is a good idea is daunting. Still, Riley knows it’s an opportunity she can’t afford to pass on. And when she meets Trevor Cooper, the show’s executive producer, she’s stunned by their intense chemistry.

Trevor’s sole intention is to persuade Riley to allow Best Bites TV to do a show on her restaurant. But when he walks into Riley’s office, he stops dead in his tracks. The professional, aloof woman on the phone is incredibly beautiful and funny. But can he convince her that he’s interested in Riley for himself? Or is he using the undeniable pull between them to persuade her to agree to his offer?


Add to your Goodreads


And Don’t Miss the First Three Standalone Novels in the Fusion Series!

LISTEN TO ME CLOSE TO YOU BLUSH FOR ME

“There seems to be an explosion in the jackass population,” I reply, and sigh, passing my glass to Kat for a refill.

“Where are you meeting them?” he asks, and I bite my lip.

“Didn’t have to. If you met him at the gym or the grocery store, or somewhere else in person, you wouldn’t be embarrassed.”

“Yes, you are. Otherwise, you wouldn’t mind telling me.”

“Fine.” I sigh and rub my forehead with my fingers. “I met them online.”

“I don’t know where else I’d meet people,” I reply. “I’m at work at least fifty hours a week. I don’t do school or clubs or church, and I rarely go to the grocery store because I always eat here.”

“I could stop feeding you,” Mia interjects and I toss her a glare.

“I don’t understand any of the words you just said.” I squint at him, trying to process.

“Switch it up,” he says with a grin. “Try to meet people somewhere else. I mean, you didn’t meet me online, and I’m not an asshole.”

“Sure, you’re cute, and you look like you have your shit together, but I suspect that once I got to know you I’d learn that you have mommy issues and fourteen dogs.”

“You might,” he says with a thoughtful nod. “I do hide those things well. All I’m saying is, stop using the dating sites and try meeting people in real life.”

“Yeah. Easy for you to say.” I pout into my wineglass. “Do I need to send you some money for this counseling session?”

“Nah, the first one’s on me,” he says, tossing that crazy-hot smile at me again. “Just don’t combine Star Wars and Star Trek anymore and that’s payment enough for me.”

He pulls a few bills out of his wallet and tosses them on the bar, then stands to leave.

“Have a good night, and good luck,” he says.

“Trevor,” he says, and my stomach immediately does at least four cartwheels. “Trevor Cooper.”

“You’re early,” is all I can think to say. My cheeks burning, my fingertips immediately tremble.

“You’re not supposed to be here for two more days.”

“I like to come early. Get the lay of the land, that sort of thing.” He smiles and waves. “See you in a couple of days.”

He walks away, and as soon as I hear the front door close, I turn to my friends and just stare at them in utter horror.

“Tell me that didn’t just happen.”

Kristen was born and raised in a small resort town in her beloved Montana. In her mid-twenties, she decided to stretch her wings and move to the Pacific Northwest, where she made her home for more than a dozen years. During that time, Kristen wrote many romance novels and joined organizations such as RWA and other small writing groups. She spent countless hours in workshops, and more mornings than she can count up before the dawn so she could write before going to work. She submitted many manuscripts to agents and editors alike, but was always told no. In the summer of 2012, the self-publishing scene was new and thriving, and Kristen had one goal: to publish just one book. It was something she longed to cross off of her bucket list. Not only did she publish one book, she’s since published close to thirty titles, many of which have hit the USA Today, New York Times and Wall Street Journal Bestsellers lists. She continues to self publish, best known for her With Me In Seattle and Boudreaux series, and is also proud to work with William Morrow, a division of HarperCollins, with the Fusion Series. Kristen and her husband, John, make their home in her hometown of Whitefish, Montana with their two pugs and two cats.

THE BEAUTY OF US Goodreads ** Kristen Proby Goodreads