The Lady of Royale Street by Thea de Salle 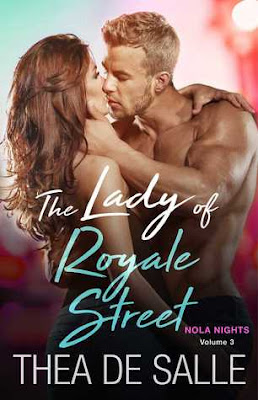 From the New York Times bestselling author of the NOLA Nights series comes a rollicking, sexy tale of opposites attracting in the midst of wedding planning.

Alex DuMont is everything his brother Sol isn’t: regimented, serious, and devout. Between twelve-hour workdays, service to the church, punishing daily workouts, and bi-weekly therapy sessions, Alex is, as Sol once put it, “a kettle perpetually whistling as it boils itself to death.” So when Sol announces his marriage to Arianna Barrington, heiress and society sweetheart, Alex is the absolute worst choice to be his best man. Sol asks anyway and Alex reluctantly agrees. It’s only a week, after all, and Alex should be able to stop himself from throttling his big brother for a meager seven days. Probably. Maybe.

Theresa Ivarson is Arianna’s best friend and the maid of honor. A decorated photojournalist who interrupts her globetrotting to stand beside her friend, Theresa is beautiful, witty, and unafraid to speak her mind. So when she is faced with working with the best man from Hell, a Viking who doesn’t know how to smile, is bossy, and about as pleasant as a cactus, the sparks are bound to fly—and not in the good way. To make matters worse, Sol and Rain's wedding planner was hit by a bus the week before their special day, and Alex and Theresa find themselves at the center of a list-ditch effort to pull the wedding together. But when you can’t decide if you want to kiss or kill someone, something’s bound to break.

The Lady of Royale Street is the third book in the Nola Nights series. It can be read as a standalone.

Alex DuMont finds himself in NOLA for his brother Sol's wedding. Sol is marrying Arianna Barrigton in just one week. Arianna's family is well-known and the paparazzi are always lurking trying to find the next scoop into her life. Alex, as the best man will have to run interference. He will need to coordinate the last minute plans with Arianna's maid of honor, Theresa. But, when Alex mistakes Theresa, who's a photojournalist, for a paparazzi and destroys her expensive camera, the best-laid plans suffer a major hiccup.

Theresa Ivarson is happy her best friend Rain has found happiness and is getting married to the man she loves. Theresa is ready to help as much as she can. She wants to make the wedding an event to remember without the intrusion of the press.  There is just one problem. She doesn't know if she wants to kiss or kill the best man.

I liked this book. It had an entertaining cast of characters although sometimes, some of them were a little too stereotypical for my taste. There's a big question of religion and sex between the main two characters which was something different in itself especially since it was Alex who had the reservations. I'm impressed in how the author dealt with this specific thematic. It's not an easy one to approach in a romance.

Thea de Salle is the pseudonym of a New York Times bestselling author spinning sweet, naughty, funny kissing stories with her best friend. Thea’s handlers live in South Shore Massachusetts with a small army of furry, short-legged creatures. Their collective interests are books, jewelry, makeup, travel, and oodles of inappropriate humor. You can find Thea on Twitter and Tumblr.