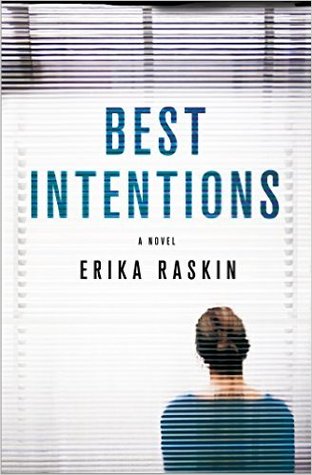 Marti Trailor—social worker on hold, mother of three, wife of a successful obstetrician, daughter of a Congressman—is ready to go back to work. She’s thrilled when the perfect opportunity falls in her lap. The catch? The job is at her husband's hospital and he seems not to share her enthusiasm. Undeterred, she takes the position counseling vulnerable young women as they prepare to give birth.

Marti quickly begins to feel like she is making a difference in the lives of her clients. Soon, though, she finds herself caught up in the dark side of the medical center—with its long hours, overworked doctors and entrenched practices. When she witnesses something she can't unsee, Marti, who has always done her best to keep a low-profile, finds herself thrust under a dangerous spotlight with all of Richmond, Virginia watching.

In her captivating domestic suspense novel Best Intentions, Erika Raskin weaves together high stakes hospital politics, the pressures of family life, and the consequences of trying to do the right thing.

The best thing about Best Intentions is that the author doesn't give us too much too soon.  From the beginning, you know the main character is accused of something. You just don't know what.

Marti Trailor is a social worker who is a stay at home mom. She has three children whom she loves dearly and she's married to Elliot who's an obstetrician. But lately, Marti has been feeling restless. When she meets Win Phillips during a social gathering and he offers her a job, she can't contain her enthusiasm. She's ready to go back to work and help people. One drawback, her new position will take her closer to her husband's professional life and he is not crazy about the idea.

Marti finds herself quite busy with her new job and she develops a special bond with one of the girls she's helping. Tonya Maine is an eighteen-year-old girl who's pregnant but the father of her baby doesn't want to be involved. Marty becomes her support system. She helps her find a place to live and later becomes her Lamaze partner.

These long hours at work, her friendship with Win, her personal interest in Tonya leads to constant disagreements with Elliot. Not that he's not to blame. He's always too busy to help with the children, take his wife out or simply spend time at home. Marti knows her marriage is on the rocks, Elliot might be cheating and when something awful happens, her freedom is at stake.

Best Intentions had characters I liked and disliked. Colby, Marti's best friend was priceless. She was supportive, funny and had her own story to tell. I love Marti's brothers too. They were there for Marti in her time of need.  It was too easy to hate Elliot. He was selfish and egotistical. The word worthless comes to mind. Win, I wish he had more character development but from was I saw, I liked.

Overall, I enjoyed this novel, although, I have to say that I felt like the "discovery" was too easy and gratuitous.  I would've  preferred a different approach to the ending. Perhaps something less tidy.

A complimentary copy was provided by St. Martin's Press via Netgalley in exchange for an honest review.
Posted by MrsLeif at 1:03 PM