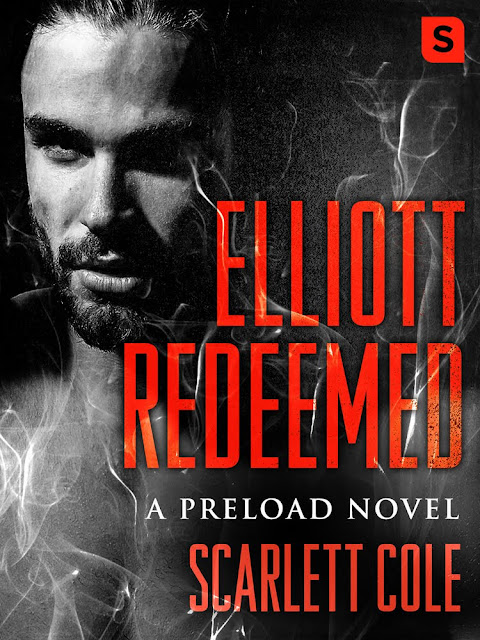 Elliott “Pyro” Dawson burns up the lead guitar like a legend. But the nickname Pyro isn’t just a clever play on words. It’s much darker. A past he's fought like hell to overcome.

Grocery store cashier Kendalee Walker is at her wits end and homeless. She's watched her fourteen-year-old son, Daniel, go so far off the rails, he can no longer see the tracks.

When the two are brought together, attraction flares, but can Elliott find the family he never had with the sexy woman and her son, or will he fall back on dangerous habits?

When all the wood was finally stacked next to his clearing, Elliott dove into the lake to cool down. Excitement began to trickle through his veins. Once he was cool, he dried off a little and wandered into the house to get one of the now-cold beers and his box of supplies.

The piano intro to “Pretending” started, and he laughed. Shuffle was reading his fucking mind.

He walked back to the fire pit and put the box down carefully on one of the Muskoka chairs nearby. He took a swig of beer, eyed his supplies, and ran his hand over the rough logs. He’d build a stack of pallets and logs similar to an inukshuk. The Inuit had used them as landmarks, and it would be one for him. It would mark home.

Elliott took his time sorting the logs into pairs of similar sizes and began to cautiously stack them. If they fell over too soon as they burned, it would ruin the effect, so he used some of the smaller pieces to build a frame to stop the logs from rolling. Periodically, he would lay a wooden pallet across the logs. When he’d used up his supplies, the structure was nearly as tall as he was. Need coursed through him. The matches were in the box, calling to him as they always did. The compulsion, the urges were so very strong. But giving into the gratification too soon ruined everything. By holding out, he could convince himself that he was the one in control. And, anyway, lighting it before it was truly dark would ruin the effect.

Forcing himself to put one foot in front of the other, he turned away and walked back into the house to make some supper. He cut up the pre-cooked chicken and served himself some of the ready-made sides he’d picked up at Loblaws, periodically looking out the window to check his structure. It would burn well, the pallets igniting faster than the logs, sending flames high into the air. Elliott took a step toward the door, desperate to strike the first match, but then turned back. He forced himself to grab a fork from the drawer, another beer from the fridge, and the plate from the counter, and wandered outside, taking a seat on the patio.

The sun went down as he ate his fill. Thoughts of Kendalee spending another night in the hospital eating takeout food kept going through his mind, and he wondered what she would think of him if she knew this was the reason he’d had to get out of Toronto for a couple of days.

Why did he think he was capable of helping Daniel when he couldn’t even stop himself? Daniel needed someone stronger than him. Someone who had enough self-control to take the extra few minutes to clean up the dirty dishes from dinner before stepping down toward the pier.

Elliott opened the box reverently, and pulled out his favorite lighter. He loved the sound it made as his thumb ran quickly over its rough surface. At his command, it came to life, a flame snapping high into the dark night. He grabbed four long matches and placed all four tips into the flame at once. They hissed to life, the smell of sulphur filling his nostrils, calming him as much as it excited him.

There was no way he’d ever be good enough for someone like Kendalee. He placed the first long match down in the corner of the fire pit, watching as the kindling took hold. He walked to the next corner and repeated the action, savoring the crackle and snap of the wood in the fire’s path. The heat began to lick at his skin, but he couldn’t step away. He would never be able to tell her why he understood Daniel, and that would always get in the way. He placed a match in the third corner and breathed deeply in a bid to control his heart rate. Moving quickly, he stepped to the fourth corner, but before he placed the match in the tinder, he ran it along the underside of his arm, pausing near his elbow. He grit his teeth tightly as the heat seared his skin. The bite of it cleared all thoughts from his head. Thoughts of the band, the tour, a small boy in the hospital, and a strawberry blonde he wanted to know better. None of them could compete with this.

Delicately, he placed the fourth match down and stepped back. The whole structure roared to life as flames climbed the wood.

Fire would always be his mistress. He didn’t have room for anyone else.

Born in England, Scarlett Cole traveled the world, living in Japan and the United States before settling in Canada where she met her own personal hero – all six and a half feet of him. She now lives with her husband and children in Manchester, England where she's at work on her next book. She is the author of The Strongest Steel.