The Girls in the Water by Victoria Jenkins 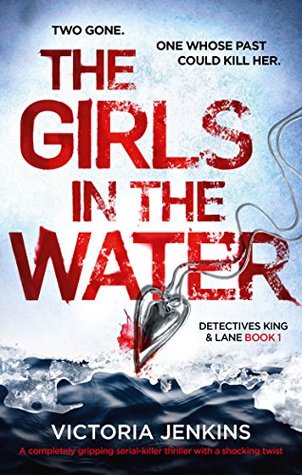 ‘The first one had been an accident. He had never intended to kill her. But as he looked down at her body, he knew there would be a next one…’

When the body of Lola Evans is found in a local park on a cold winter’s morning, Detective Alex King and her new recruit Chloe Lane are called in to lead the hunt for the killer.


Days later, a second girl goes missing. It seems the two shared a troubled history, and were members of the same support group. Who is the monster preying on these vulnerable girls?


As the detectives start to piece together the clues, Chloe realises that she too is in danger – as she uncovers secrets about her own brother’s death which someone will kill to keep hidden.

Good beginning to this suspense series!

Detective Alex King is in charge of a new case involving the torture and killing of a young troubled woman. Alex's team has to find the killer before he/she does it again. Chloe Lane is a young police officer who's part of her team. Alex trusts Chloe but she can't help feeling like Chloe is hiding things from her.

Chloe likes and respects Alex. She looks up to her. Yet, Chloe has difficulty revealing the truth about her past and the death of her own brother. Chloe was never satisfied with the ruling of his death as a suicide. She knows her brother didn't kill himself. Someone was behind it and it's time she uncovers the truth with or without Alex's help. Breaking the rules might be worth it especially now that someone is sending her cryptic messages.

When another girl goes missing, the stakes become much higher.

The Girls in the Water was quite enjoyable. I liked how the author was able to tie together the strings of the storyline. Both Alex and Chloe were having problems in their personal life, making it harder to concentrate on what was happening to the missing girls. I thought this made it more realistic.

I'd like to know what is going to happen to both women and their future adventures. Count me in for the next book in this series.

A complimentary copy was provided by Bookouture via Netgalley in exchange for an honest review.
Posted by MrsLeif at 4:17 PM