A Momentary Marriage by Candace Camp 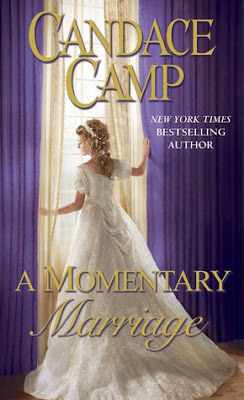 James de Vere has always insisted on being perfectly pragmatic and rational in all things. It seemed the only way to deal with his overdramatic, greedy family. When he falls ill and no doctor in London can diagnose him, he returns home to Grace Hill in search of a physician who can—or to set his affairs in order.

Arriving at the doctor’s home, he’s surprised to encounter the doctor's daughter Laura, a young woman he last saw when he was warning her off an attachment with his cousin Graeme. Alas, the doctor is recently deceased and Laura is closing up the estate, which must be sold off, leaving her penniless. At this, James has an inspiration: why not marry the damsel in distress? If his last hope for a cure is gone, at least he’ll have some companionship in his final days, and she’ll inherit his fortune instead of his grasping relatives, leaving her a wealthy widow with plenty of prospects.

Laura is far from swept off her feet, but she’s as pragmatic as James, so she accepts his unusual proposal. But as the two of them brave the onslaught of shocked and suspicious family members, they find themselves growing closer. They vowed, “until death do us part”...but now both are longing for their marriage to be more than momentary in this evocative romance, perfect for fans of Sabrina Jeffries and Mary Balogh.

I had fun reading A Momentary Marriage.

James de Vere is dying. He knows he's sick and he's tired of fighting whatever is killing him. Yet, as a promise to his cousin Graeme, he decides to seek the help of one last doctor. To his shock, the doctor has passed away and his daughter Laura is in trouble trying to find money to pay his debts. James is a sensible man but in a crazy moment, he proposes marriage to Laura. He knows she needs money and he has plenty to provide her with. He would rather she inherits his land and possessions than his own family.

Laura has never forgotten James. He was the man who broke her heart a decade ago when he told her she couldn't marry Graeme. She doesn't like James very much but when he gives her a choice in regards to her future, she takes what he's offering.

Laura soon discovers there is more to James sickness than meets the eye. She's determined to save him and without realizing it, she starts having feelings for him.

James doesn't seem to be able to stop from caring for Laura. He likes having her around. To his own annoyance, he starts behaving like a man crazy in love.

James and Laura were a great pair. Neither was a romantic person but falling in love changes people and both had a hard time maintaining the practical facade when these new feelings were making themselves known.