Her Fake Engagement by Gigi Garrett 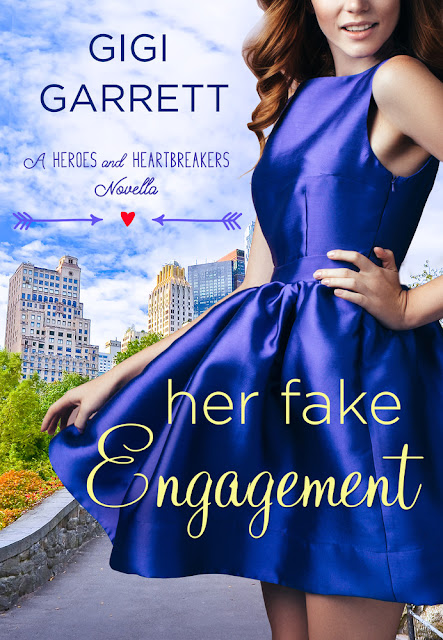 No artists, no smokers, no men with beards… Manhattan real estate broker Lottie Langerman feels confident that if she follows her long list of dating rules, she’ll meet The One and her life will unfold exactly as planned. Everything changes when her best friend decides to throw a fake bachelorette party—just to see what all the fuss is about—and Lottie reluctantly agrees to play the role of bride-to-be for a night.

Faking an engagement turns out to be more fun—and trouble—than Lottie could have imagined. Not only does her dream man think she’s taken, but Lottie keeps running into bearded Brooklyn jewelry designer Tyler, who breaks every single one of her rules...yet manages to get under her skin like no one else. Soon, Lottie finds herself at a crossroads where she must decide: Play it safe—or ditch the rules and follow her heart?

Elsa May holds up two ancient-looking hair crimpers and explains, “We’re going to pregame and go totally eighties on everyone’s hair.” Then she hands me another piece of pink paper, labeled “Lottie’s Dream Man and Dream Wedding.” “You’re going to fill this out. After all, Rule Two says you need a story and you need to stick to it. People are going to ask you about the lucky guy and the big day, and we all need to be consistent with the stories.” She gives me a pen. “Get to work and make up a guy and a life as fabulous as that ring.”

I lift my hand and stare at my dream rock again. It’s heavier than I would’ve guessed, but I’ll admit it looks perfect, even against my neon yellow T-shirt.

I drain half of my glass of champagne and sit down with the questionnaire.

I shake my head and start filling out the worksheet. Mia crimps my hair.

Let’s call him Daniel Paddington since this is a preposterous idea and he can have an equally silly last name. Hell, his nickname can even be Bear.
He’s British, from just outside of London. Grew up in one of those picture-perfect stone homes.
Very Downton Abbey.
He’s older.
He’s an incredible dresser and wears only custom suits from Bond Street. (On the weekends, he wears cashmere sweaters and nice dress pants. He doesn’t even own jeans and if he did, he would still call them ‘trousers.’)
While he embodies the best of all British stereotypes (the charming accent, an utter gentleman, conversationalist), he’s found New York to be his true home.
He works hard and makes good (okay, let’s say great) money, but also enjoys the arts and sports although he doesn’t disappear every fall the second that (American) football starts. In fact, he thinks fantasy football is simply fantastical and not worthy of his actual time.
He makes me laugh and he’s my best friend (other than you girls.)

We both got off the 1 train at Christopher Street. When we exited on street level, it was raining. Pouring. He turned the same way as I did and offered to share his umbrella. Then he lied and said he was going the same direction as me and walked five blocks out of his way before it stopped raining. He got my number before he left and we were engaged six months later.

Since my family is small and his is across the pond, we decided on an intimate, Tuscan-vineyard wedding. I’m going to wear Vera Wang and he’s going to wear a dark gray suit. The bridesmaids will wear currant and there will be a harpist playing throughout the ceremony. We will dance to “At Last.” Everyone will ask if we took lessons, but we hadn’t. We just work well together.
The dinner will go on forever, course after course. The cake will be lemon. We’ll exit to friends popping bottles of champagne. We will honeymoon on the Amalfi Coast.

I hand Elsa May the paper. “Here you go,” I say, rolling my eyes even though I did surprise myself with how into it I got. “CliffsNotes: handsome Brit and I are getting married soon in Italy. Very George Clooney and Amal.”

Since childhood, Gigi Garrett has loved playing with and rearranging the 26 letters of the alphabet. When she's not imagining and writing fictional lives, she's probably chasing her kids around or thinking about pizza. She lives near the beach and believes the ocean fixes almost everything. She loves to hear from readers! https://www.facebook.com/Gigi-Garrett-227334737731401/