All the Best People by Sonja Yoerg 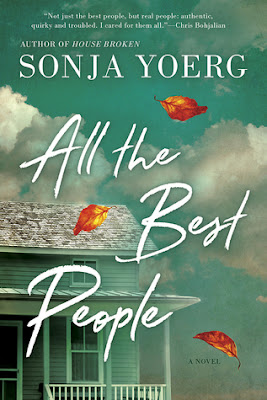 An intricately crafted story of madness, magic and misfortune across three generations from the author of The Middle of Somewhere and House Broken...

Vermont, 1972. Carole LaPorte has a satisfying, ordinary life. She cares for her children, balances the books for the family’s auto shop and laughs when her husband slow dances her across the kitchen floor. Her tragic childhood might have happened to someone else.

But now her mind is playing tricks on her. The accounts won’t reconcile and the murmuring she hears isn’t the television. She ought to seek help, but she’s terrified of being locked away in a mental hospital like her mother, Solange. So Carole hides her symptoms, withdraws from her family and unwittingly sets her eleven-year-old daughter Alison on a desperate search for meaning and power: in Tarot cards, in omens from a nearby river and in a mysterious blue glass box belonging to her grandmother.

An exploration of the power of courage and love to overcome a damning legacy, All the Best People celebrates the search for identity and grace in the most ordinary lives.

Sadly this book didn't work for me. I know I'm in the minority but I was disappointed with it. Instead of making me believe these females could forge their own path, I felt the opposite was true. Their unhappiness, health issues, bad luck, lack of money or status was all due to their heritage: the "pirate" blood. I wanted the author to convince me that their "bad blood" was not to blame.

The novel brings to focus three different generations of females:

Solange Gifford who in the 1020's is married to Osborn. Solange comes from the lake people called the "pirates" while Osborn comes from the upper class. At the beginning of her marriage, Solange is happy with her life and later on with the arrival of her baby girl Carole, she's ecstatic. It's not until her husband becomes the lead attorney in a controversial case involving classes that her marriage starts to crumble.

Carole LaPort is Solange's daughter. In the 1970's she's married with three children. Unfortunately, lately, Carole believes something is wrong with her. She's hearing voices and believes people are talking behind her back. Carole is terrified she's sick like her mother and tries to hide her problems from her family. She feels exhausted. The voices never leave her and they are becoming stronger.

Janine is Carole's sister and Solange's other daughter. She's selfish, self-centered and manipulative. She has set her eyes on Greg Bayliss, a teacher in the same school where she works. She wants him as her husband and nothing will stop her from getting what she wants. Not even Miss April Honeycutt, the new goody-two-shoe teacher.

Allison is Solange's daughter. When the book starts, she's getting ready to go back to school but she soon realizes her mom is acting strangely. The activities they used to do together, don't interest her mother any longer. Allison knows something is wrong but no one in her family is paying her any attention.

From the females portrayed in this story, I thought Solange had the worst fate. I felt sorry and angry for her. She didn't deserve what happened to her. So sad there was no one to help her. I'm sure this probably happened to some females during those times.

The best part of All the Best People has to be the mental health depiction. I thought it was well done and believable. It leads me to believe the author took her time with her research during those decades. Mental health diseases were misunderstood and poorly treated.

Even though this book was not for me, I liked the writing style. I can see myself picking another novel by this author.