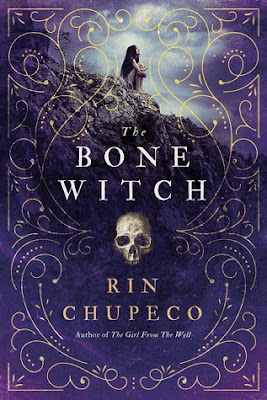 The beast raged; it punctured the air with its spite. But the girl was fiercer.Tea is different from the other witches in her family. Her gift for necromancy makes her a bone witch, who are feared and ostracized in the kingdom. For theirs is a powerful, elemental magic that can reach beyond the boundaries of the living—and of the human.Great power comes at a price, forcing Tea to leave her homeland to train under the guidance of an older, wiser bone witch. There, Tea puts all of her energy into becoming an asha, learning to control her elemental magic and those beasts who will submit by no other force. And Tea must be strong—stronger than she even believes possible. Because war is brewing in the eight kingdoms, war that will threaten the sovereignty of her homeland…and threaten the very survival of those she loves.

The Bone Witch was a very unique book. I adored the world and the cultures the author created for this book. I wanted to learn more and more about the world and the fantasy elements of it. The world was unique and I adored the diversity the author included with the eight different kingdoms. It was clear that the author put a lot of time and effort into her world and the kingdoms, which I really appreciated. The magic elements were very intriguing, and I loved learning about them.All of that being said, I did start to loose interest in this book while I was reading it. I loved the magic and the world-building, however, I felt like those elements started to take over the book. II wanted more than just world-building, descriptions, and magic in this book.

There were times when I felt like the plot wasn't really moving anywhere, which lead to the book feeling slower. I was waiting for something more exciting to happen, but it felt like nothing was really happening until the end. I hope book two will deliver more action and excitement!I liked the main character, Tea, but I didn't LOVE her. Tea was a strong girl who would stand up for herself and others. She had really awesome abilities with her asha powers, and I thoroughly enjoyed learning about her powers. However, her character was kind of hard for me to connect to because I felt like I didn't get the chance to learn a lot about her. I feel like there is more to her personality than what was presented in this book. So, I am hoping for more character development with her in book two! One thing that I did like a lot about Tea was her relationship with her brother. I was glad that the author included a sibling relationship in this book. I definitely would recommend this to people who like lush and extremely descriptive writing with their fantasy novels!