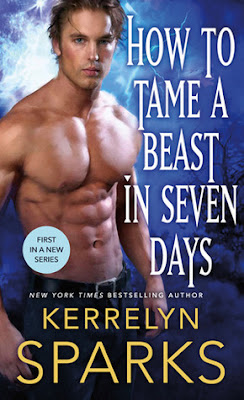 Luciana grew up on the Isle of Moon, hidden away because of her magical powers. But when her father arrives, he offers her a choice: remain on the island or return with him and marry the Beast of Benwick in order to save their legacy—and her father's life.

Lord Leofric, the Beast of Benwick, has not been touched since he was a child. Born with the power to harness lightning, he is a danger to everyone he touches. When he meets his betrothed, he expects a loveless, lonely marriage...until he discovers she's vastly more powerful than he realized. But is she strong enough to withstand his touch?

If they can survive, their love will alter the future of the kingdom. But will their extraordinary powers cost them everything?

This book was a fun and quick fantasy read! I was in the mood for a fantasy set in a historical time period, and this book hit the spot. The world that the author created in this book was very interesting. I loved learning about the magic in this medieval world. The magical powers that the characters possessed added a very intriguing element to the story. I was fully invested in the world and what it had to offer. I would like to see even more world building in the next book! I liked the two main characters in this book, Leofric and Luciana. Luciana was such a sweetheart, and I couldn't help but adore her and root for her. She was so caring and understanding. I really admired how dedicated she was to the people she loved and how far she was even willing to go for strangers. She wasn't a pushover either, which I appreciated. Leofric was labeled as a "beast" who was tough and cruel. It was nice to see beneath that hard exterior and learn that he was actually a caring man. Learning about his motives made him a lot more relatable and even swoon worthy. Luciana and Leofric had a sweet romance. Their chemistry was obvious, especially when they would have delicious banter. In the beginning, I thought the romance had a nice build up, but eventually felt rushed. I was surprised with how quickly they became emotionally invested in each other. It was just a little hard for me to believe. Overall, this was an entertaining and easy read. If you are looking for a quick fantasy book to jump into, I would recommend checking this out!