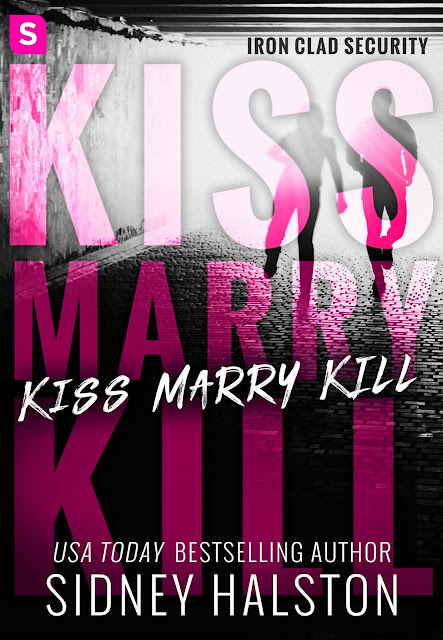 Five years ago they fell in love after one whirlwind summer. Now she's an internationally famous musician and he's officially out of the military, but when their worlds collide, can they keep things strictly professional? Sweet, thrilling, emotional, and sexy, fall in love with Megan and Jax in USA Today bestseller Sidney Halston's Kiss Marry Kill.


It was just supposed to be a regular Thursday afternoon…and then he saw her. Sitting in seat L214, one seat over from his at the baseball game, right next to her douche of a soon-to-be-ex-boyfriend. An impromptu kiss for the kiss cam, and Jax knew his life would never be the same. Five years and a tour in Afghanistan later, Jax is back stateside running his own private security firm, Iron-Clad, with his best friend. He isn't the man he used to be... but Megan isn't the sexy and sweet, though sheltered, twenty-two-year-old he left behind, either. And she's in trouble.


Megan Cruz has made something of herself. She’s turned her dreams of pop stardom into a reality. But when a deadly stalker breaks into her home claiming to be her number-one fan, the only person she can turn to is the boy who got away. But Jax isn’t the same carefree charmer who stole her heart, then broke it when he joined the military. This man is seductive, hard, guarded. And he'll do anything to protect what's his.

Megan Cruz is the lead singer of the famous TNT band. She lives on Star Island in Miami. Everything changes when someone breaks into her home. From her bedroom closet, she calls her family. Her break in becomes immediate news. Next thing she knows, Jax, the man she spent 4 days with is back in her life and offering his protection.


“Promise me, you’ll be happy”

Jackson "Jax" Irons is the co-owner of Iron Clad Security with his best friend Joey Clad. Five years ago he met Megan at a Marlins baseball game. They shared a kiss thanks to the Kiss Cam and then they spent four days together just before he was deployed on his first tour to the Middle East. But, Jax is not the same carefree guy Megan knew. His time as a marine has changed him. Jax feels like he's the only one who can protect her and he doesn't want to risk her life by getting distracted by his feelings.

“The same kind of girl who agrees to have lunch with a stranger and stays for four days and rocks my world so deeply I’ve done nothing but think about her for five years.”

Kiss Marry Kill is a romantic suspense novel. It's told from both main characters POVs and it goes back in time when they both first meet. I like the storyline. The suspense about the stalker was always lurking but the romance took precedence.

Both Meagan and Jax were easy to like. They both had changed from five years ago but their feelings for each other never died. I could feel their connection without a doubt.

I would recommend this novel to the romance lovers who enjoy a side of suspense.


“You, sweetheart, you make me smile.”

A complimentary copy was provided by the publisher via Netgalley in exchange for an honest review.
Posted by MrsLeif at 8:29 AM