By Her Touch by Adriana Anders 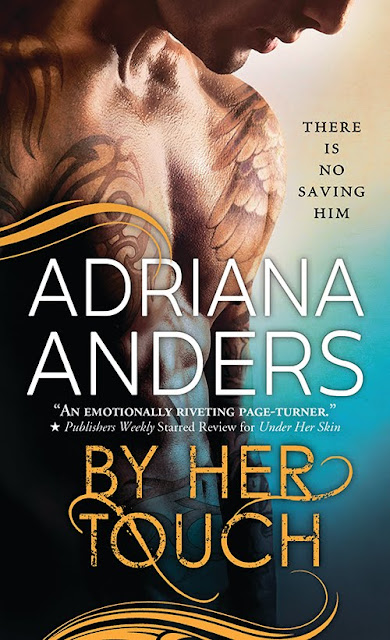 Undercover cop Clay Navarro left the Sultans biker gang a changed man. Its ringleaders may be awaiting trial, but he wears the memory of every brutal act he was forced to commit tattooed across his skin. He doesn’t have space in his messed-up life for anything gentle—not now, maybe not ever.

Dr. Georgette Hadley is drawn to the damaged stranger’s pain, intimidated but intrigued by the warmth that lies beneath Clay’s frightening exterior. But when the Sultans return looking for revenge, she finds herself drawn into the dirty underbelly of a life forged in violence…that not even her touch may be able to heal.

Adriana Anders has acted and sung, slung cocktails and corrected copy. She’s worked for start-ups, multinationals and small nonprofits, but it wasn’t until she returned to her first love—writing romance—that she finally felt like she’d come home. Today, she resides with her tall French husband, two small children and fat French cat in the foothills of the Blue Ridge Mountains, where she writes the dark, gritty, steamy love stories of her heart. 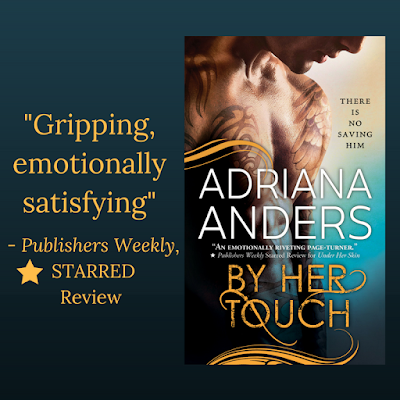 He’d fallen asleep. Either that or he’d gone to that place, wherever it was, that he seemed to go on her table. Only this time, George’s hands were on him. She felt heavy and warm, and his back was big and strong and supple, but so sweet, laid out for her, waiting, needing…

Dear God, what’s wrong with me?

He was numb by now. He had to be—as numb as the cream would make him, which wasn’t very. Another dip, another swipe, and his flesh rippled beneath her touch. Maybe not asleep?

She wanted to put her hand on his head again and push him down, but there was nowhere to go. She
wanted to lean into him and over him and maybe just stretch herself across all that muscle and bone. Desire settled into her pelvis as she stroked his shoulders, ran a hand a little too far down an arm that had absolutely no need of numbing cream. None.

What the hell is wrong with me?

But still, she couldn’t quite convince her body to stop. Slowly, she kneaded her thumbs around those
beautiful scapulas, felt him shudder slightly, and pulled away, hyperaware of how strange her actions were—how unethical and wrong, but maybe…maybe just…

“Don’t stop,” he mumbled, and honestly, that was all she needed.

His back—this solid, robust plane—was like the culmination of all of the backs she hadn’t had the pleasure of touching over the years, and goodness, she wanted it. She wanted his back.

Was this how it felt to go crazy?

George stepped away, embarrassed and more than a little worried for her sanity. Was she really, truly, going to cave in and do things she might very well—no, would definitely—regret over some stranger’s back?

He grunted—or maybe it was more of a groan—and twisted his neck so one shadowed eye peeked out at her.

“’S the best thing that’s happened to me in fu…frickin’ years.” His voice came out low, almost on a whisper.

“This is…” George couldn’t get the words out, she was breathing so fast. “This is weird. I can’t… I don’t—”

There was hardly any hesitation at all, and then the succubus wearing her skin stepped forward. Closer, until her belly was level with his hand. “Are you numb?”

She reached out and stroked him, right on that horribly defacing burn, wondering if he could feel her.
Wanting him to.

The weight in George’s belly turned liquid, spread out on a wave of shivery sensation that she hadn’t felt since she’d been just a kid, squished in the backseat of Dylan Dean’s bright-red Mustang with nothing between her legs but his hand, and nothing in her head but blind teenage lust.

“Here?” Her fingers caressed him where his skin had melted into unsightly whorls, tracing the jagged surface and wishing he’d let her do more. Although, even as she thought that, she wasn’t sure if she meant more as in treatment for the burn, or more right now, to his body.

Possessed, she caressed him, up his side, almost to his armpit and its tuft of dark hair. It looked sexual,
that hair, like something she wasn’t supposed to see. Then tracing along the top of his shoulder to the back of his neck and down, down, down his spine, the bumps adding texture along the way, the rocky road of his body the most enticing thing George had ever seen.

More sounds escaped him, little grunts that said he liked what she did, and those fueled her even more.
Lord, she wanted to flatten herself on top of the man, to cover him, and… What? Hump him? No. Not really.

Make him feel good? Touch every little bit of him? Heal him? Protect him from whatever hell he’d been through?

With a snap that surprised even her, she removed the glove that separated his skin from hers and lightly—oh so lightly—felt the reality of his flesh without the barrier of Nitrile in between. The noises were hers this time, and the contact was kinetic, burned the air, turned the heat up, ate out her brain.
His hand, right there on the edge of the table, somehow turned until his palm rested flat against her belly—not pushing, just…absorbing, fingers taking in her softness, exploring her the way she was him.

Before she knew it, she’d curled her palm around that hunk of a shoulder, leaned in until more than her lab coat pressed against the man, her breathing shaky and short. “I don’t know what I’m doing,” she whispered, in a dream. The bridge of her nose skimmed his hairline, and she took him in, smelled him, got a bigger dose of what she’d only guessed at until now. And it was good, elementally good, unexplainably, animalistically perfect. A smell she could dive into and live off of.

“Hang on.” His hand reached for hers, grasped it, skin to skin, and held on tight. “Don’t know what the hell you’re doing to me, but it’s making me crazy.”

“I don’t know; I don’t know. I’m not… This isn’t me,” George muttered, eyes clearing. She pulled hard at her hand, blinked hazily at the man laid out before her, and moved toward the door. “I’ll be…I’ll be right back.”