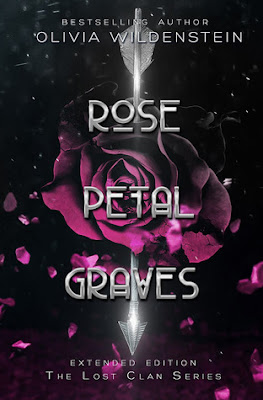 Founded two centuries ago by a powerful tribe of Gottwa Indians, Rowan was a quiet town, so quiet that I fled after graduation. Staying away was the plan, but Mom died suddenly.

Dad said she suffered a stroke after she dug up one of the ancient graves in our backyard, which happens to be the town cemetery. Creepy, I know. Creepier still, there was no corpse inside the old coffin, only fresh rose petals.

As we made preparations for Mom’s burial, new people began arriving in Rowan, unnervingly handsome and odd people. I begged them to leave, but they stayed, because their enemies—my ancestors—were beginning to awaken.

I usually love any book that involves fae, so I was very excited to get my hands on this book! I thought the fae elements of this book were entertaining. I didn't really like this book, but I still found it entertaining, kind of like a reality tv show. It wasn't GREAT, but I still found myself continuing to read it.There were a lot of different things going on in this book, which made it kind of hard to follow what was happening. Things felt like they were kind of just thrown in the book, and it was hard to really get into the storyline. There were also a lot of characters, and I couldn't connect with them either. I liked that some of the characters seemed morally gray, so that added an interesting element to some of the characters. I felt like a lot of the characters that didn't think through their actions, especially the main character. Catori made a lot of dumb decisions and she was quite childish. She also trusted strangers (usually because they were hot guys), and that drove me crazy! I felt bad for her and the situations she found herself in, but it didn't excuse some of her decisions. The romances were a bit fast-paced, and I didn't really like any of the romances. There were multiple love interests, and that made it hard to root for any of them. I felt like we didn't get the chance to really get to know the characters and see the potential of them with Catori. The romances just didn't seem believable. I think this story could have definitely benefitted from having fewer love interests. Overall, this was entertaining, but there were a lot of things that bothered me about this book. This book just wasn't for me.

2 / 5 Fangs*This ebook was given to me in exchange for an honest review. *
Posted by MissDaemon at 8:00 AM