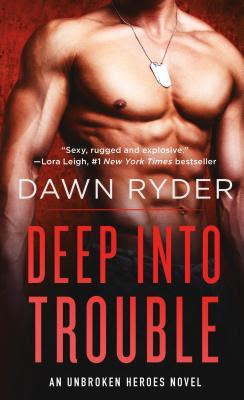 Desire is more dangerous than anything in Deep Into Trouble, the next Unbroken Heroes novel from Dawn Ryder.
Saxon Hale lives for the hunt--taking down the bad guys, stopping them dead in their tracks. His latest mission has him in New Orleans, where people go for the party that never ends. But fun is the last thing on Saxon's mind now that he's a breath away from closing in on a vicious overlord known only as the Raven. Until an innocent young woman unknowingly enters the very deadly game...
Ginger Boyce is a librarian who's growing tired of being so buttoned-up on the job, and when she attends a conference in the Big Easy, she decides to taste the wild side of life. But when her dance with darkness becomes lethal, she's in dire need of protection--and ends up in the embrace of a man who radiates danger and desire. Soon Saxon finds himself Ginger's shield against an enemy whose power they haven't yet begun to face. But will he be able to keep his mind on his mission while the very woman under his care drives him beyond distraction?

Deep Into Trouble was an addictive and fun read! I haven't read the previous books in this series, but I wish I would have read them before I read this book. I had a little bit of a hard time remembering who was who and understanding some of the backstories. However, it wasn't hard to jump into this book and understand the basics of this book. The suspense in this book kept me on my toes the entire time. I loved how I never felt like the characters were truly safe. There seemed to be danger around ever corner, which is what kept me really invested in this book. I thought the author did a great job at keeping the plot of the book fast-paced and full of action.The romance was sexy and full of steam. I thought the characters had a lot of chemistry that lead to moments that made me want to fan myself off! I thought they made a really hot couple! However, their relationship developed a bit too quickly for my taste. It felt like insta-love to me, so I couldn't really buy their emotional connection. I still like Saxon and Ginger as a couple, but I wish it would have been a slower burn. The main female character, Ginger, was a great character. I loved the fact that she was a librarian and liked to read because I could really connect to her on that regard. It was so relatable and actually humorous to see an average girl get thrown into the action-packed scenarios that Ginger found herself in. However, Ginger was strong and determined to get out of those situations, which made me root for her even more.The changing of POVs made some parts of this book hard to follow, which took me out of the story a few times because I couldn't figure out who was narrating. I wish the POVs would have been more consistent because it would have made this book easier to understand. Overall, this was a sexy and suspenseful read. I would recommend this book to people who are looking for a steamy and action-packed book!