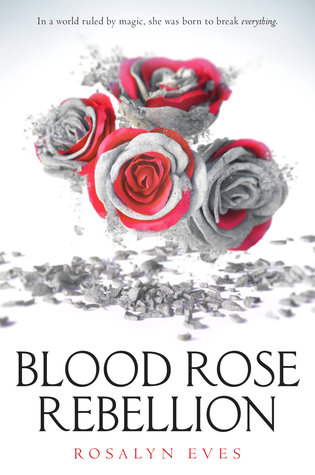 The thrilling first book in a YA fantasy trilogy for fans of Red Queen. In a world where social prestige derives from a trifecta of blood, money, and magic, one girl has the ability to break the spell that holds the social order in place.

Sixteen-year-old Anna Arden is barred from society by a defect of blood. Though her family is part of the Luminate, powerful users of magic, she is Barren, unable to perform the simplest spells. Anna would do anything to belong. But her fate takes another course when, after inadvertently breaking her sister’s debutante spell—an important chance for a highborn young woman to show her prowess with magic—Anna finds herself exiled to her family’s once powerful but now crumbling native Hungary.

In Hungary, Anna discovers that nothing is quite as it seems. Not the people around her, from her aloof cousin Noémi to the fierce and handsome Romani Gábor. Not the society she’s known all her life, for discontent with the Luminate is sweeping the land. And not her lack of magic. Isolated from the only world she cares about, Anna still can’t seem to stop herself from breaking spells.

As rebellion spreads across the region, Anna’s unique ability becomes the catalyst everyone is seeking. In the company of nobles, revolutionaries, and Romanies, Anna must choose: deny her unique power and cling to the life she’s always wanted, or embrace her ability and change that world forever.

I was in the mood to start a new fantasy series and when I saw the cover of Blood Rose Rebellion, I knew this was next on my list.

I couldn't wait to dive into a new world full of new characters and mythology but I'm sorry to say it but I felt disappointed. Most of my issues have to do with the main character, Anna Arden. Anna was not easy to like or to root for. It didn't help that she fell easily for any boy who paid her a little attention. Once she kissed one, she was falling for him. She also made some questionable choices. Some made her look selfish. Her sole purpose seemed to arise from the desire to be accepted in her society. In order to achieve it, she needed to wield magic. She didn't think too closely about the consequences of her actions. Although, I think she finally realized it by the end of the book.

I did like Gábor. He was a Romani (gypsy) living in Hungary. There was a lot of prosecution and prejudice against the Romani and this book does a good job of describing it. Gábor tried very hard to keep Anna from making a rush decision. He knew they needed a change but he didn't want Anna to get hurt in the process. I felt like he cared for her, I wish their romance didn't feel like insta-love to me.

The book had great potential. We have the Luminate who had great power. They had magic and they were in control of the rest. The Luminate were all from important families. Anna was part of one of those families. However, she was Barren, meaning she had no powers except being able to break spells. The Circle kept the "peace" in any way possible including force.

I would say the best two things about Blood Rose Rebellion are the folklore and the historical facts thread into the novel. It was great learning about the Slavic mythology and their folklore. So many interesting entities and I wish the author had delved a little bit more into them. In regards to the historical facts, I thought the author did a wonderful job mixing them with fiction. It shows that she did her research.

I went into this book with really high expectations, so I was disappointed when this book didn't meet my expectations. There were things that I enjoyed about this book, but unfortunately, they didn't outweigh what I disliked about this book. One of the things I liked about this book was the setting. The Hungarian setting added a really interesting element to the story. The Eastern European element in this book was extremely intriguing, and it was obvious that the author put a lot of time and research into it! The concept of the Luminate was another element that I enjoyed about this book. Their magic and their control over magic was interesting to read about. I liked how the author made them seem both good and evil. The author really nailed the idea that there is more to every story and motive. However, a lot of the elements with the magic and the mythology felt like info-dumping. There was a lot for me to wrap my mind around, so the long descriptions made it hard for me to really understand everything. I still enjoyed learning about the information, but I wish it would have been handled differently. I didn't really connect to any of the characters in the book. My least favorite character was the main character, Anna. Anna never thought out her plans or considered the consequences. She came off as really immature and hard to root for. She also seemed to fall in love WITH EVERY SINGLE MALE CHARACTER. I didn't care that she was kissing multiple boys, I just cared that she seemed to think she was in love with every single boy she kissed. I was surprised with how slow this book felt to me. I was expecting a lot of action, but I felt like this book fell short on that aspect. Overall, I was disappointed with this book. There were elements I really enjoyed in this book, but I just wish there would have been more in this book that I enjoyed. However, I do plan on reading the second book in this series, because I would like to give this series another chance. I still think this series has potential, and I think book two could really turn this series around for me! If you are looking for a book set in Eastern Europe with lots of kissing and some magic, then I would recommend checking out this book. 2 / 5 Fangs*This ebook was given to me in exchange for an honest review. *
Posted by MrsLeif at 8:25 AM