Sparking the Fire by Kate Meader 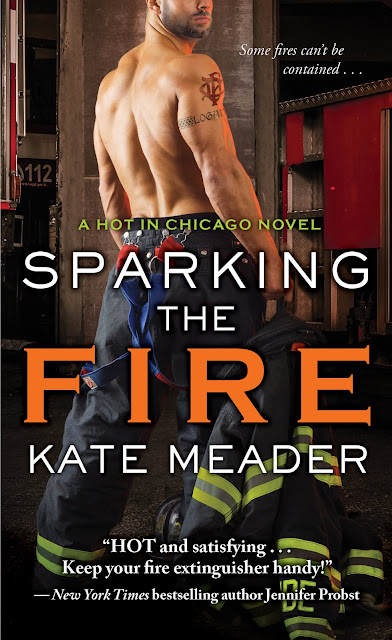 Heating up reading lists this Fall will be Kate Meader’s highly anticipated Sparking the Fire, the “sexy and sassy” (#1 New York Times bestselling author Jude Deveraux) steamy third novel in the Hot in Chicago series, where former lovers unexpectedly reunite for a sizzling affair that will have the director yelling, “Quiet on the set!”

AN OLD FLAME STILL SIMMERS…
Wyatt Fox, resident daredevil at Engine Company 6, needs a low key job to keep him busy while he recovers from his latest rescue stunt. Consulting on a local movie shoot should add just enough spark to his day. But then in struts Molly Cade: the woman who worked his heart over good, and then left him in the Windy City dust.

BUT WILL A NEW SHOT AT LOVE LEAVE HER BURNED?
Actor Molly Cade, America’s fallen sweetheart, finally has her shot at a Hollywood comeback with a dramatic new role as a tough-as-nails firefighter that promises to propel her back into the big time. And she’s not going to let anything stand in her way—even a certain brooding, blue-eyed firefighter she’s never quite been able to forget…Their story is straight out of a script: irrepressible, spunky heroine meets taciturn, smoldering hero. But these two refuse to be typecast, and when the embers of an old love are stoked, someone is bound to get burned…

Praise for Sparking the Fire:

“The tale of hot firefighters and the women—and one man—who love them has come to an end. Meader ends this series with role playing, fierce family loyalty and multiple orgasms. The male protagonist goes through a transformation that showcases his vulnerability, insecurities, possessiveness and protectiveness. The many instances of a family sticking together through it all are more than enough to tug on the heart strings, but the steamy sex and sentimental pillow talk make this book a must-read.”
—RT Book Reviews Four Star Review, Scorcher

“Can a firefighter and a movie star really make it work? Meader (Rekindle the Flame, 2015) immerses you in Wyatt’s tight-knit family of foster siblings that she’s built throughout the Hot in Chicago series, and readers will feel like part of the family in no time. Her descriptions of Chicago will leave fans wanting to travel to the Windy City and fall in love with their own firefighters.”
—Booklist

"Falling in love with you was the easiest thing I’ve ever done."

Hot Firefighter....do I need to say anything else?

The Hot in Chicago series brings us a new couple to fall in love with. I do recommend reading the books in order since all the couples have something special.

In Sparking the Fire, Kate Meader gives us the full background story about the secret behind Wyatt Fox's weekend retreats. She spices it up with the romance between Wyatt and Molly.

Wyatt is one of the firefighters in the Dempsey family. His brother and step-father were killed in the line of duty. Wyatt found out something about his brother that no one else knows. Keeping the secret is getting harder as time passes. Wyatt recently was injured in his last rescue mission and now his boss is making him the consultant for a movie involving firefighters. Wyatt agrees to do it until he finds himself next to Molly Cade, the woman he shared a full week with in a hotel room years ago and has never forgotten.

"Wyatt had now entered the land of Mollywood."

Molly Cade has something to prove after her career is being affected by her personal life. She recently got her divorce from her famous actor husband and her intimate pictures were distributed all over the world. She wants to show the public she's more than just a pretty face and nice body. She wants to move forward and making a movie she can be proud of is first on her list.  The last thing she needs is to start a romance with a hot firefighter.

"Hello, seren-freaking-dipity, it was him. Not just him from all those years ago, but him, the elusive Dempsey."

Wyatt and Molly have great chemistry together. They also have unfinished business. You can almost feel the pages sizzling every time they were together. As always the banter was funny. I love that some of the other characters have a say in this novel. It makes it more like a real family, just adding one or two new members with each book.

I'm hoping for more books in this series.

This series continues to be enjoyable with each new book. I love Kate Meader's writing style and the characters she has created in this series. The way all of the characters interacted with each other was great, and I really liked seeing characters from the previous books in this book. The banter between the two main character in this book was hilarious and the passion between them was steamy to say the least!

I LOVED Wyatt. What was so great about Wyatt was that he wasn't a stereotypical alpha male. Sure, he was protective, but he was also loyal, kind, humble, and family oriented. Wyatt always put his family and those he cared about first, and I admired him a lot for that. I quickly and easily fell in love with Wyatt. Molly was an okay main character, but I didn't love her as much as I loved Wyatt. What bothered me about Molly was that she acted bratty at times and made some really dumb decisions. I didn't like they way Molly treated Wyatt sometimes. I thought she had some redeeming qualities, but she definitely did things that rubbed me the wrong way.Even though there were some slow parts in this book, I thought it was very entertaining as a whole. I absolutely loved Wyatt and the entire Dempsey family! I think fans of this series will definitely enjoy this book! 4 / 5 Fangs*This book was given to me in exchange for a honest review. * 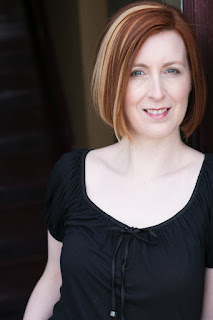 Kate Meader was raised on romance. An Irish girl, she started with Catherine Cookson and Jilly Cooper novels, and spiced it up with some Mills & Boon. Now based in Chicago, she writes romances of her own, where sexy contemporary alpha heroes and strong heroines match each other quip for quip. When not immersed in tales of brooding mill owners, oversexed equestrians, and men who can rock an apron or a fire hose, Kate lives on the web at katemeader.com.


We are excited to do a Fire Giveaway to celebrate the third in Kate Meader’s Hot in Chicago series, Sparking the Fire. This giveaway will include Flirting with Fire (Book 1) and Playing with Fire (Book 2).
You can visit all sites on the blog tour to enter the Fire Giveaways – but keep in mind you can only win once! U.S. only.
To enter leave a blog post comment below:

September 23:
USA Today’s Happy Ever After – Exclusive Excerpt only

HOT TIP: Kate is also offering a $25 Amazon gift card during the Sparking the Fire release tour. It will run Monday September 26 to Friday October 7. Enter here.
a Rafflecopter giveaway
Posted by MrsLeif at 8:00 AM