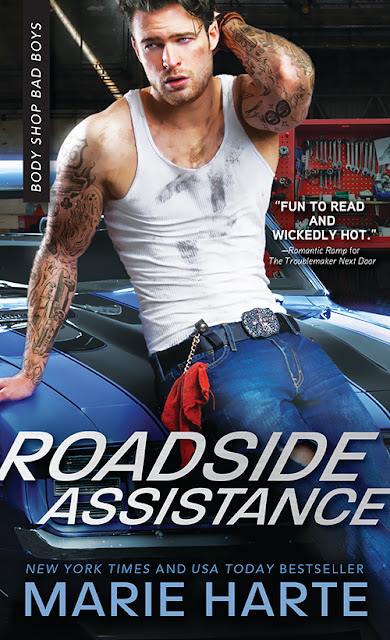 Underneath the axle grease and tats
He's a gentleman
Foley Sanders figured he'll always be content with a life of cars and casual hookups. Until a run-in with Cyn, a statuesque firecracker with a hate-on for men, leaves him bewitched and intrigued-much to her annoyance.

Maybe Cynthia Nichols was a little hard on Foley, that muscular, tattooed, super-hot mechanic next door. But she's tired of feeling defensive about her size and has sworn off men. She's got a new job, new life, perfect plan. Foley has trouble written all over him-no way is she going to fall for his charms.

Foley might look like a bad idea, but underneath, he's all gentleman. Too bad Cyn's not buying it. What's a bad boy to do when the goddess of his dreams won't give him the time of day?

This is book two in the Body Shop Bad Boys. I didn't read Test Drive but after finishing Roadside Assistance, I really want to read it.

Cynthia Nichols is a successful woman in her thirties. She co-owns a business with her brother Matt and sister-in-law Nina. At the beginning of the book, Cyn is fiery mad. The Body Shop next door has overtaken her parking lot and she made sure the one in charge of the body shop at that time, Foley, knows about it. She was having a bad day and she kind of went off on him. Despite her temper she wasn't blind, the guy was hot.


Dear God, where did the Websters find their mechanics? San Quentin? Rikers? Baddies-R-Us?

Foley Sanders is a mechanic. He loves his job and he's happy with his life. He loves his mother Eileen and his best friend Sam. When Cyn shows up at the shop, he can't help but notice her. She is tall and curvy and suddenly, she becomes his type. Unfortunately, for him, she is not an easy puzzle to crack. She's stubborn and she has a temper. She also has some self-image problems thanks to her mother telling her she is fat and no one would love her unless she loses weight. But, Foley is not a quitter. He knows they can be good together and he is going to make it happen.


he wanted a woman with looks, brains, attitude, and strength

This was a really sweet story! Foley was a great guy. He had a great heart despite not having much in the form of ambition. He was happy with the ways things were going in his life. Cyn, had an awful mother, she was constantly belittling her but Cyn was determined to move forward. I loved Cyn, she had spirit and wasn't scared to say what was on her mind.

Marie Harte also had a way of making the secondary characters important to the story. In this case, Eileen and best friend Sam's side stories were both interesting.  I'm pretty sure Sam is going to need a book himself. I see trouble lurking for his girl. I can't wait to read it.

Foley didn’t know how he’d shoved both feet in his mouth so fast, but yeah, he’d done it. He stared at her empty chair, sincerely confused about how their lunch date had gone from awesome to shitty in the span of seconds.
They’d been doing so well. She’d shared details about herself. He’d told her how close he was to Sam and his mom. She seemed to have no problem with him—until he’d mentioned what she ate. He still had no idea why that should be a big deal. The woman was gorgeous, and she obviously knew she’d never be a stick. But who the hell wanted that?
The whole package had to attract him, at this age at least. Years ago he’d been a dog. He’d readily admit that. But now he wanted a woman with looks, brains, attitude, and strength.
Cyn seemed to possess all that. Talking to her had been easy and engaging. She didn’t let him steamroll the conversation. The superficial part of him acknowledged he’d never seen a more beautiful woman. Her face could have launched a dozen or more magazine covers. And what guy didn’t want more than a handful in the breast department?
Well, fuck, he was hard again.
He calmed himself, remembering her confusion, her anger, and her poorly concealed hurt. Man, he’d stepped in it big-time. Now he had to make things better. Somehow.
Except he had no idea how to go about apologizing. Any way he thought about it, he’d end up reminding her that he’d called her a big girl. And while he’d meant it as a compliment—he was big guy, after all—she’d apparently been insulted.
“Women.”
He paid the bill and left in a huff. By the time he’d gotten back to work and involved in a Wrangler’s suspension problems, he hadn’t gotten any further with a solution to his dilemma.
“So what happened on your date?” Lou asked.
Sam and his big mouth. “It was okay.” It was a disaster.
“You don’t look happy.” Lou didn’t move from his position by the Jeep.
Foley stepped out from under the lift. “I’m thrilled to be at work. Life is just grand.”
“Oh man. She shot you down?” Lou didn’t laugh at him, so Foley decided to take a chance.
He glanced around and saw Johnny buried in a Chevy, so he leaned closer and whispered, “She left me sitting with my thumb up my ass. We were getting along great, then somehow she thought I called her fat or some shit, and she took off.”
“What exactly did you say to her before she got upset?”
Foley ran down their conversation.
Lou groaned. “Foley, you never comment on what a woman eats or doesn’t eat. Are you loco or just stupid?”
“We were being honest with each other.” Foley was confused. “I never called her fat. You’ve seen her. She’s fucking built, man.”
“Woman hears ‘big,’ she’s hearing ‘fat.’ I’ll bet she’s dealt with a lot of bullshit over her size for a long time. She’s tall for a woman, then you add her curves. Between guys wanting a piece of her and other women being jealous of her, adds up to issues, my friend.” Lou sighed then smiled. “Issues I’d be happy to help her get over. She really is one sexy woman.”
“Yeah, yeah, Lou. Keep it in your pants.”
Lou chuckled. “Dealing with dickheads has probably made her sensitive. Then you said something that added to that. You’re screwed.”
Just what he didn’t need to hear.
“But look at the bright side.”
“Yeah?”
Lou gave him a big old smile. “I didn’t call her anything. And I have a sudden thirst for coffee.”
Foley would have slugged him if Sam hadn’t entered the garage.
“How’d the date go?”


“Big mouth.” He slugged Sam instead. 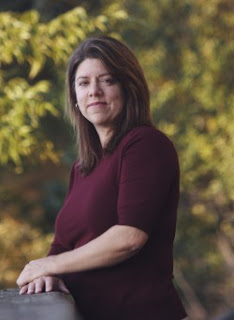 Caffeine addict, boy referee, and romance aficionado, MARIE HARTE is a confessed bibliophile and devotee of action movies. Whether hiking in Central Oregon, biking around town, or hanging at the local tea shop, she’s constantly plotting to give everyone a happily ever after. Visit marieharte.com and fall in love.