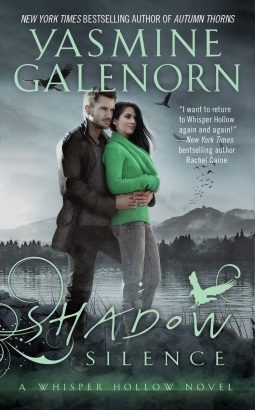 New York Times bestselling author Yasmine Galenorn invites readers to Whisper Hollow, where spirits walk among the living and the lake never gives up her dead…

Fifteen years ago, I ran away from Whisper Hollow, Washington, a small town on Crescent Lake in the Olympic Peninsula. But truth is, if you were born here, you can never really leave. I'm Kerris Fellwater, and I'm a spirit shaman. It's my responsibility to drive the dead back to their graves, because around Whisper Hollow, people—and secrets—don't always stay buried.

My best friend Peggin finds herself under a curse after she is almost taken by the Lady of the Lake, and the Unliving are determined to drag her back to the hungry waters. As Bryan—my guardian and mate—and I work to break the hex, we uncover a dark and violent mystery from the past. One the Hounds of Cú Chulainn will do anything to guard—even if they must summon a legion of the dead to destroy Whisper Hollow.

Whisper Hollow:
Where spirits walk among the living,
and the lake never gives up her dead.

This series is only getting better! Shadow Silence was nail-bitting good from the first page until the last one!

So what to expect? I can you give you an idea.

As we know (if you read Autumn Thorns) the town of Whisper Hollow is full of people with abilities and ghosts. If the town wants you, you suddenly found yourself there. If you want to leave it and the town still wants you, you can't get away. You also must remember these rules:


1.If you hear someone call your name from the forest, don’t answer.
2.Never interrupt Ellia when she’s playing to the dead.
3.If you see the Girl in the Window, set your affairs in order.
4.Try not to end up in the hospital.
5.If the Crow Man summons you, follow him.
6.Remember: Sometimes the foul are actually fair.
7.And most important: Don’t drive down by the lake at night.

Kerris Fellwater is a Spirit Shaman. Her job is to make sure the dead remain dead. Although, lately she is learning that her job description is even bigger than she thought.

Kerris has to deal with multiple things happening at the same time. Her best friend Peggin almost becoming the Lady's next victim. But, Peggin is not out of the woods since the Lady has marked her and there is a race to find a way to protect her before the Lady comes calling again. Also, someone has tried to quiet the tree that alerts the town when something evil is coming. The Hounds are still causing trouble. Kerris will need to establish a communication with Veronica. Last but not least she will have to deal with her feelings for Bryan, her protector and lover.

I was excited to read Shadow Silence since I had liked Autumn Thorns. I was intrigued by this new world Yasmine Galenorn had created. There were rules to follow or the Lady of the lake was going to take you.

This second installment has a lot more character development. We get more insight into the world of the dead and Veronica "Queen of the Unliving, Fallen Daughter of the Dark Mother, Watcher from the Land of the Dead".  Also, more info in regards to the abilities of the matriarchs and Kerris powers as well.

The romance is also there. Both sets of couples are moving along with their relationships. At some point, I felt some of it was moving too fast but since they live in Whisper Hollow were people don't seem to live long, I gave them a break. Besides, both couples were just perfect together.

I was amazed at the world-building. The attention to detail was fantastic. I was flipping the pages as fast as I could read them and by the end, I was not disappointed. If anything, I really can't wait to read the next one in this series.

This is by far my favorite series by this author.

Yasmine Galenorn continues to surprise me with each book of hers I read! I thought the previous book in this series, Autumn Thorns , was great, but Shadow Silence was even better! The world Yasmine has created in this series is so captivating. Each time I learned something new, it only made me want to know more about the world. The fantasy aspect was very intriguing and it was easy to see that Yasmine put a lot of time and effort into fleshing out the fantasy elements, and I loved it. The characters were as awesome as ever in this book. The main characters grew a lot throughout the story and it was great to see their development. All of the characters are becoming more and more interesting as the books go on. One of my favorite things about the characters is their friendships with each other. Kerris has a great group of friends and I love reading about Kerris working with them to kick butt!Bryan was so sexy in this book! I always loved it whenever Bryan was in a scene. His romantic relationship with Kerris was great. I think they are so perfect for each other and they make a freaking awesome dynamic duo.All of the romances in this book were adorable, even if they were a little fast paced at times. I appreciate the fact that the romances are there, but they never take away from the main story arcs. The romance just added to the plot, and I thought that was really refreshing!I am so excited to get my hands on book three, because I know it will knock my socks off! I would recommend this series to anyone who likes urban fantasy mixed with romance.

I was so excited to get back to Whisper Hollow after finishing the last book, Autumn Thorns, which was the first installment in the Whisper Hollow Series. It's set in a little sleepy town in the Pacific Northwest, which couldn't be more perfect!


In the first book Kerris Fellwater returns to her hometown of Whisper Hollow to take her place as spirit shaman after being gone for 15 years. She can see the spirits that walk the earth and helps them cross over. In this book, Shadow Silence, there are so many more things that seem to be coming to light in this mysterious town, for one she is learning so much more about her powers as a spirit shaman, she's learning more about the Lady of Crescent Lake, all while trying to figure out how to deal with other possible threats that might come their way.

Through all of that Kerris and Bryan seem to be able to make some time for romance. I love how open and honest Bryan is with Kerris about his feelings and intentions with her. He leaves no room for guessing. At. All! He is exactly the type of guardian and lover she needs! He is soooo perfect! Leather duster and all!

We are getting to know each character so much more. We are seeing their kinks and eccentricities because there are plenty! Not only that, but some characters have transformed and are getting more comfortable in their own skin.

Shadow Silence is fantastically written and I cannot wait to get more of this town, with all of its magical elements, intriguing residents, and scary as hell creatures!